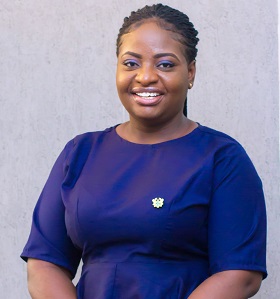 Though many ridiculed her from the outset, those utterances did not deter her from abandoning a passion she had at the age of nine years.

She kept pushing, overcoming stigmatisation, and now, the passion has become a profession and an inspiration to many.

Ms Gladys Love Amissah, who interprets high Government encounters to the deaf community, wants to become the biggest female interpreter in Africa and the world.

This journey which looks somewhat smooth is riddled with challenges and to encourage those who look up to her, Love, who is a member of the Nsawam Road Branch of the Church of Christ, shared her amazing story with The Spectator

She currently signs for high profile government engagements with the public, including presidential address, and the ongoing Ministry of Information press conferences to update Ghanaians on the novel coronavirus among others.

She is Gladys Love Amissah but many people affectionately call her Love Amissah, she was born to Mr Prince Pasco-Amossah and Ms Alice Lartey.

“I have 15 Siblings, six males and nine females,” she noted.

Ms Love works at the Ministry of Parliamentary Affairs as the Chief Director’s secretary.

“Growing up I wanted to be a nurse, but I realised I was afraid of blood so I diverted to pursue a course in secretaryship, and that is how I became a professional secretary,” she said.

Her passion for signing was discovered at age nine, when she started developing interest in sign language.

The interest kept growing stronger anytime Love saw her pastor sign to the congregation at the Church of Christ.

Following this, she opened up to her mother about it, who later told Pastor Sam Williams, of the Deaf Ministry of their church of her daughter’s interest.

She was then made to learn the sign language, and through the teachings and other personal interactions with some deaf people the passion kept growing stronger to what it is now.

She started her educational journey at the University Primary School at Winneba in the Central Region for her basic education and completed Junior High School at the Methodist 2 JHS at Adabraka in Accra.

Love continued to Breman Asikuma Senior High School, where she read Arts including Literature in English. According to her, she disliked French at the time, and would frown anytime the teacher entered the class.

Sharing some fond memories, Love revealed that she had no nickname, but students used her middle name, Pasco, her father’s name, to call her.

“Most of them didn’t know it was my real name,” she disclosed.

According to her, the only time a challenge would be easily overcome, is when there is strong interest and determination.

She made some shocking revelation that when she started, most people were saying “If I continue signing I will go deaf, but that didn’t deter me from learning it.”

Interestingly, she revealed to this paper that, her first television assignment was a disappointment.

“My first assignment on TV was a Meet-The-Press and I flopped “basaaaa”, I didn’t know l should look into the camera, I was just looking around and when I finished people started teaching me how to behave when on set. I must say that since then, it has improved

“Sincerely, when I started signing for the first gentleman of the land, the President, people started insulting me and saying, this woman wears only one dress every time. I laughed because they did not know the ethics governing my profession,” she said.

According to her, due to the nature of their profession, they mostly wear plain dresses anytime they are signing on set.

Touching on her relationship with the deaf community, she said, “It is very great because, anytime I finish with my assignment I send them messages to know if they understood the interpretation.”

Ms Love Amissah wants to impact more lives globally and inspire others in the profession.

“I would like to encourage everyone to take his or her profession serious and be focused.”

Love’s favourite food is Jollof rice with some beverages and loves going out with her family or sleep at her leisure.

She expressed appreciation to the Ghana National Association of the Deaf (GNAD) who organised many workshops for them to better their signing and paid her tuition fees and feeding at University of Cape Coast for two (2) years and further expressed her appreciation to “Church of Christ members for their encouragement, especially her mother, Madam Alice Lartey, and Mrs Diana Amissah, her sister in-law.

Focus on some African women earning a living through farming