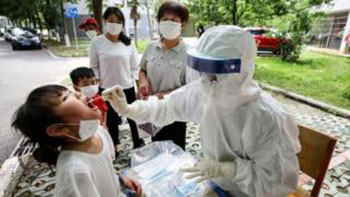 Global health leaders are pushing for an independent review of the response to the COVID-19 pandemic at the United Nation (UN)’s World Health Assembly.

Monday’s virtual meeting brings together envoys from 194 member states of the World Health Organisation (WHO).

The WHO is facing questions on how it has dealt with the coronavirus (COVID-19) pandemic.

Chinese President Xi Jinping, who has defended his country’s actions during the outbreak, spoke during Monday’s opening ceremony.

He said China had acted “with openness and transparency” and insisted that any investigation should happen after the pandemic was brought under control.

In other opening remarks, WHO Director-General Dr Tedros Adhanom Ghebreyesus welcomed a proposed resolution calling for a review of the WHO’s handling of the pandemic and said it would initiate it “at the earliest opportunity”.

South Korean President Moon Jae-in said the WHO must be given more legal powers to ensure that countries report outbreaks and share data.

“A novel infectious disease could emerge at any time and we must be able to respond more quickly and effectively,” he said.

The two-day assembly – an annual meeting that reviews the work of the UN’s health agency – comes amid recriminations between the US and China over the virus.

The US has already stopped its funding for the agency and is promoting its own vaccine programme.

More than 4.5 million people have been infected and more than 300,000 have died since the virus emerged in China in December.

The European Union, alongside countries including the UK, Australia and New Zealand, is pushing for an inquiry into how the pandemic has been handled and what lessons can be learned.

“How did this pandemic spread? What is the epidemiology behind it? All this is absolutely crucial for us going forward to avoid another pandemic of this kind,” she said.

However, she added that now was not the time for “any sort of blame game”.

A draft resolution calling for a review, to be put to a vote on Tuesday, requires a two-thirds majority to pass and already has support from 116 of the 194 member states, according to Reuters.