Gloria Sarfo and D.Y.Donkoh win Man & Woman of the Year at TGAEA 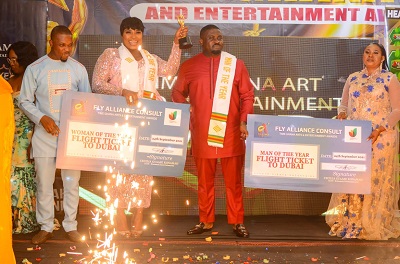 This year’s edition under the theme, “Peace and Unity” honoured about52 players in the creative arts space who have contributed immensely to the growth amidst difficult times.

At the end, the ultimate awards went to Gloria Sarfo and D.Y Donkor, as the Man and Woman of the Year respectively.

In addition to the plaque and souvenirs, they would embark on a trip to Dubai, courtesy Fly Alliance Consult as part of the prize package.

On the night, Best Actress and Enterpreneur of the Year went to Emelia Brobbey.