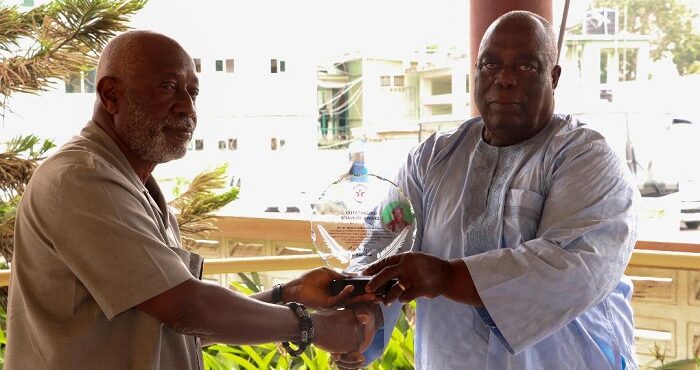 In retrospective recognition of his outstanding bravery and selfless commitment in preventing the Rwandan Genocide from escalating to catastrophic dimensions, the executive members of Ghana Military Academy (GMA) intake-8 have honoured Major General Henry Kwame Anyidoho (Rtd) for his leadership.

This comes on the back of President Paul Kagame’s recognition of his outstanding bravery in saving thousands of lives at a time when the international community including the United Nations had withdrawn and abandoned Rwanda in the heat of the war following an instigation by Belgium which had 10 soldiers killed but Ghanaian troops under the order of Gen Anyidoho, stayed.

As part of efforts to celebrate their colleague who has brought honour to the Ghana Armed Forces, Intake 8 on Wednesday 27 July 2022, added to the laurels of General Anyidoho, presented a beautifully designed plague to him at the Veterans Administration Club for putting a mark worth emulating in the history books of time.

The plaque reads “Your colleagues of Ghana Military Academy Intake VIII, in recognition of your outstanding performance as Deputy Force Commander of the United Nations Assistance Mission for Rwanda.

“Your singular act of bravery and courage in maintaining the Ghanaian contingent in Rwanda when all other participants abandoned the mission prevented the Rwandan Genocide from escalating to catastrophic dimensions.”

Receiving the plague, Gen Anyidoho thanked the executive members of Intake 8 most sincerely for the honour done him. He shared some profound experiences and lessons learnt from the Rwandan Genocide with them.

It would be recalled that on Monday, 4 July, 2022, at a simple, colourful and impressive ceremony in Kigali, President Paul Kagame showed his gratefulness by honouring retired Generals Anyidoho and Adinkrah for their outstanding bravery in saving thousands of lives at a time the United Nations had abandoned Rwanda in the Genocide of 1994.