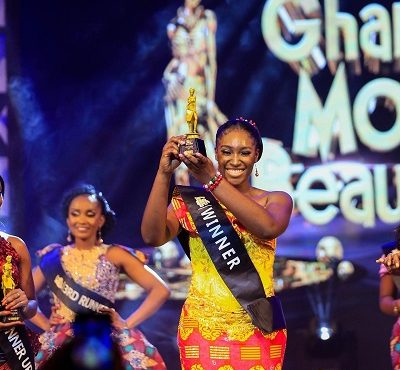 It was an anxious moment aseveryone in the national theatre auditorium was waiting for, the announcement of who had surmounted the daunting task of defeating five other contestants.

The auditorium was immersed in a thunderous applause and chants as Sarfoa was mentioned as Ghana’s Most Beautiful 2021, after weeks of exhibiting exceptional quality in the reality show.

In addition, she will embark on an all-expense paid trip to Dubai and be a beneficiary of a one-year supply of GTP fabric among other packages from sponsors.

On the night contestants had the opportunity to sell their regions by how they were ushered into the auditorium to share their dream projects as well as respond to questions bordering  on national issues to the admiration of the patrons.

The immediate past queen, Naa Dedei Botchwey, encouraged all the constestants not to give up on their dreams and projects regardless of the outcome, adding that the GMB platform alone was enough to make their dreams a reality.

Patrons were entertained with  amazing performances from Abiana, Cina Soul, Adina and Sefa on the night.