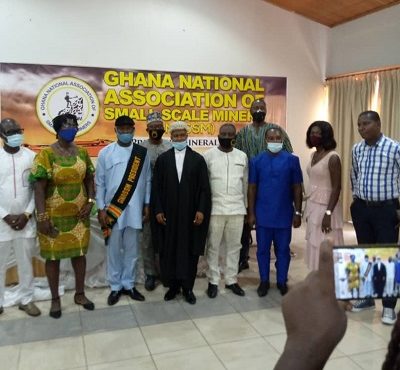 A nine-member national executives of the Ghana National Association of Small Scale Miners (GNASSM), has been elected and sworn into office by the Supervising High Court Judge, Justice Kofi Akrowiah, in Kumasi.

Headed by Mr Philip Akufu as President, he polled 160 votes to beat Emmanuel Yirenkyi Antwi who managed to get 57 votes in a hot contest conducted in the 10 mining districts of GNASSM.

Alhaji Baba Ahmed was re-elected as the National Organiser by defeating Philip Kwabena Bawa with a wide margin while Razak Abdul Alhassan went unopposed to become the Director of Communication.

Two hundred and twenty-six delegates participated in the election which was supervised by the Electoral Commission (EC).

The election was initially scheduled for March 24, 2020, but it was delayed due to the emergence of COVID-19.

Mr Richard Kofi Afenu, a former Director of the Minerals Commission, in his keynote address stressed the importance of the GNASSM in the mining industry describing it as a key sector to the economy.

He reminded the association of the provisions of Act 933 which regulated the industry and urged members to monitor their own activities in order not to operate outside the law to sustain the industry.

Mr Afenu urged the members to ensure good mining practices as well as maintain peaceful co-existence with communities in which they operate.

The newly elected President of GNASSM hinted that he would work hard to rebrand the association, to re-position it to promote and regulate small scale mining as well as seek the welfare of members.

He assured that the new executives would work vigorously to avoid illegal mining and sustain the mining industry.

The national president  said he would promote women in mining  in line with the   Sustainable Development Goals (SDGs) to ensure gender balance  as part of transformational measures to develop the fortunes of the  GNASSM.

He said his administration would work to promote a responsible and sustainable small scale mining sector and promised an all-inclusive, transparent administration that would respect existing structures.

Mr  Akufu, therefore, called for support of all members to enable the executives turn round the fortunes of the association.

The Chairman of GNASSM Election Transition Management Team (ETMT), Frank Osei, commended all members and urged members to support the national executives  as they chart a new direction for the association for the needed change.