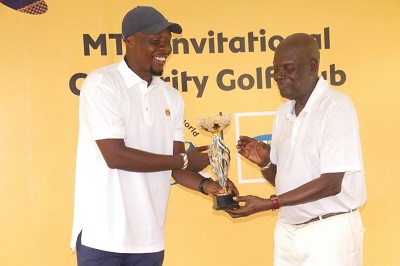 Felix Kwame Akafo emerged the new winner of the 2020 MTN Invitation Golf Tournament held at the Celebrity Golf Club in Accra on Saturday.

In a very strong field of golfers, Akafo produced a remarkable 41 points score to win the Men’s Group A division.

Ellias K. finished in second position after recording 39 points to place ahead of Christopher Mbii who came third with 38 points.

There was excitement in the Ladies event where Georgina Andoh won with 43 points ahead of Leticia Amponsah Mensah and Helen Appah in second and third positions.

The Closest to the Pin (Men) award was won by Isaac Awuni with Christopher Mbii winning the prize for the Longest Drive (Men).

Flora Hurtubise snatched the Closest to the Pin and Longest Drive prizes for the Ladies.

The event was held under the theme “Around the World in 18 Holes,” with over 100 golfers in attendance.

Board Chairman for MTN Ghana, Mr Ishmael Yamson, congratulated all players and winners for their efforts and urged them to train harder to better their fortunes in next year’s edition.

He was full of praise for the late Dr Plange Rhule in whose memory the tournament was played, saying “he was an inspiration to all.”