Goose fends itself from bully cows 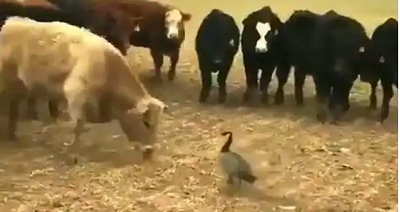 One lonely goose gives tough competition to a herd of angry cows in a video going viral online. Social media users can’t stop cheering the brave bird that took on a bunch of cows and stood its ground even as they tried to intimidate it.

In the video, the black and brown bird – identified by the Daily Mail as a Canadian goose – stands surrounded by a herd of aggressive cows. The cows appear to take turns in taunting the goose, charging at it repeatedly. The little brave goose, however, stands its ground defiantly and refuses to give in to its bullies, even nipping a cow’s head and flapping its wings courageously in the face of imminent danger. Many in the comments section hailed the heroic goose.  “I want to be as bold as this bird,” wrote one person in the comments section.  “The power of courage,” said another, while a third added: “Hilarious! Brave bird.”