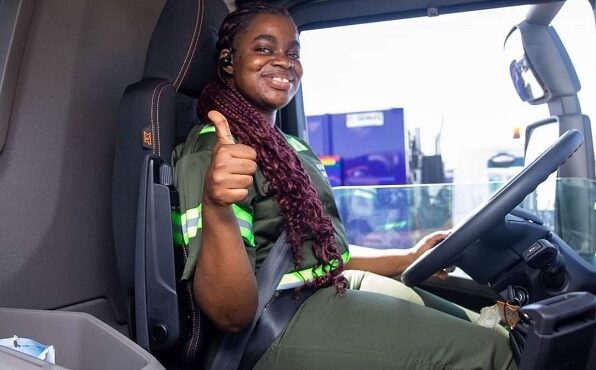 Truck driving is a profession many people regard as a man’s job and for that reason women are not easily accepted and sometimes they are castigated for taking up such a career.
But thirty-two year old Ms Grace Tivlyn Adomako Asamoah has defied the taunts of her family and friends to become what she had admired men do since her infancy.

She is currently a heavy duty truck driver with C.A. Logistics, a subsidiary of Jospong Group of Companies with more than 20 men in the yard.
The ever smiling and courteous lady who speaks good English Language could not further her education due to financial difficulties.
At age 24, she obtained her Private Vehicle Licence and became a commercial driver four years later.
She became a heavy duty vehicle driver after completing a training organised by the Ministry of Transport in collaboration with GIZ, Ghana Technical Training Centre (GTTC), Greater Accra Passenger Transport Executive (GAPTE) and Scania, a company which deals in trucks, buses, engines, in Accra.
This gave her the opportunity to train as a driver with other 60 females.
According to Grace, her passion for driving does not kill her desire to become a pilot. Though age is catching up with her, she still dreams of making it into the Ghana Air Force one day.
Education
Ms Grace Adomako is a product of Bantama Presby Basic School and Serwaa Nyarko Girls’ Senior High School, all in the Ashanti Region. She is an old student of G-Health Consult also.
Work Schedule
Grace begins her day with Preventive Maintaince Checks and Services (PMCS) on her truck to ensure the safety and ‘operationalbility’ of the truck.
“I check tyre pressure, level of engine oil, mirrors, lights, wipers, brakes among others,” she said.
She takes orders from her office which can take her to and from the Compost and Recycling Plant in Accra to landfill site at Techiman in the Bono East Region.
“I have worked on projects at Agogbloshie demolition, construction of Adjen Kotoku market and Akomadan local government project,” she said.
Challenges
All this progress did not come on silver platter as friends and family members were heavily against her choice to become a truck driver because their understanding was that heavy truck driving was the preserve of men.
He mother, who is one of the great cheerleaders, was not spared the name calling and embarrassment either.
“On several occasions I have been castigated for being a truck driver even to the extent that people chastised my mother for encouraging me to become a truck driver,” she recalled.
Her colleague male drivers also tried to intimidate her with some of them asking her how she felt rubbing shoulders with them on the road.
Asked how she felt whenever she encountered such situations, the well read truck driver, paraphrasing the words of a Chinese surgeon, Tian Wei, said, “any society that fails to harness the energy of its women is at a huge disadvantage in the modern world.”
Grace is married to Mr. Dickson Berko-Aikins an Accra-based business owner with two boys aged 11 and three.
She said that her husband initially doubted her ability due to the risky nature of the job but it was now “all praises and encouragement from my darling Dickson.”
“Massa Dickson, Mama and all those who have kept my dreams alive, thank you, but this is just the beginning,” The jovial truck driver said with giggle.
Advice
The energetic young woman who likes dancing, swimming and travelling, tells other females to follow their passion and dreams.