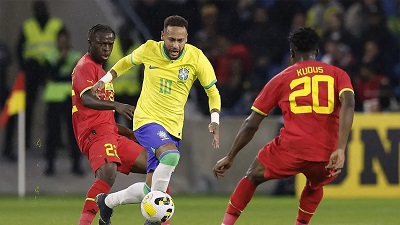 no breathing space in the Brazil
friendly on September 23

By now, majority of football-following Ghanaians may have been given an unmistakable peep into what to expect of the Black Stars at the forthcoming Qatar World Cup with the two friendlies played ahead of the Mundial.

First, it was against the ‘Almighty’ Brazil, a game that sent tongues wagging on the performance of certain players in the 3-0 defeat. The Stars slumped under three goals in a terrible, white-bread opening half that saw grave defensive frailties and tactical deficiency on the part of the Ghanaians.

It may have been a huge credit to the team that they did not concede after the recess as they demonstrated a more mature display with gleaming ball possession.

Defeat to Brazil was not unexpected; but many disciples of Ghana football may not have anticipated the crushing scoreline. For a side that has lost four times to the South American five-time world champions already, many may have thought of seeing a hungrier and more determined Ghana team. The Brazil supreme quality, nonetheless, it seems the Stars gave too much reverence to their opponents – with head coach Otto Addo also getting his tactics wrong from the get-go.

A 4-2-3-1 system of play was palpably difficult for the players to adapt. It was not too clear whether they had been practicing that system ahead of the game. It did not seem so. Indeed, when he decided to abandon that style in favour of a 3-5-2 formation after the break, the Ghanaians came into the evening strongly as the likes of Inaki Williams, Tariq Lamptey, Mohammed Salisu and others dashed to their debut appearance for the 2010 World Cup quarter finalists.

It was no surprise when Addo admitted he made some mistakes and hopefully, one hopes he picks up some vital lessons on the way before the tournament proper.

On Tuesday, the Stars showed huge improvement in their second friendly with a 1-0 win over the Los Pinoleros of Nicaragua at the Estadio Artes Carrasco Lorca in Spain. Goalscorer Abdul Fatawu Issahaku’s phenomenal left-footed curler settled matters in a game the Stars could have ran amok, but were let down by their own profligacy. Creating more than 10 opportunities and making use of just one, is really disappointing, to say the least.

It was great, though, seeing lots of new faces in this particular game as the likes of Skipper Andre Ayew and brother Jordan, Felix Afena-Gyan, Baba Rahman and others were benched.

Disconsolately, many Ghanaians were left stunned to see Hearts of Oak’s Daniel Afriyie Barnieh and Germany-based Ransford Osei specifically, being brought on after the stipulated time. What were the late substitutions meant to achieve?

Again, somebody needs to tell Mohammed Kudus that he hangs on the ball for too long. He was overly individualistic against Nicaragua and on certain occasions, one feared he was going to pick up a nasty injury that could rule him out of Qatar.

Anyway, next on the way is Switzerland which the Stars oblige in their final friendly, seven days prior to their first game in Qatar. The Swiss themselves have a crunch date against Brazil in Group C – and would be eager to put their best foot forward against the Ghanaians.

Having said that, it is imperative to give the Stars some patience and throw our full weight behind them. This is a team in transition and requires time to blossom into a cohesive force. Against all odds, the boys crushed their way to the World Cup – we have to give the technical crew the needed backing as they move to strengthen the team.

Perhaps, the Ghana Football Association (GFA) must be commended for the bold decision to take on the World’s Number One-ranked nation, Brazil, this early in the remolding process. Though it was a Himalayan assignment, that game in particular may have given the handlers a stronger sense of the task ahead.

Remember, only the Ayew brothers in this new-look team have a World Cup experience, and it tells you the humongous task ahead.

The Stars take on Portugal on November 24, South Korea on November 28, and Uruguay on December 2 in Qatar, hoping the friendlies would have positive impact in the Mundial.

Per what we have seen so far, nevertheless, we can only manage our expectations. Those who perceive revenge over Uruguay must now begin to take it easy. We are not there yet!