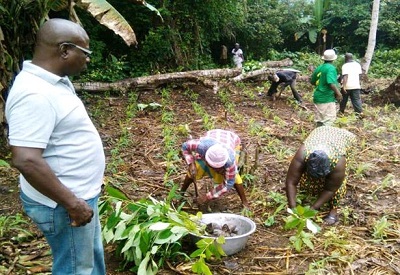 Greenglobe Ghana, an environmental non-governmental organisation, in collaboration with Community Resource Management Group (GRMA) a community group, has embarked on tree planting at Anfoeta Tsebi in the Ho West District of the Volta Region.

They planted over 2000 economic trees like Wawa, Ofram, Mahogany and other exotic tree species around degraded areas of some sacred groves in the area to protect them from further degradation.

In an interview with Samuel Deh, Chief Executive Officer of Greenglobe Ghana, he said the exercise was to help tackle emerging climate change issues including wind and rain storms that affected the environment.

He said their target was to plant over 200,000 around Eweto Range and called on the community to take active part in the exercise.

Mr Samuel Deh revealed that the project, which was funded by New England Biolab Foundation from the United States, would last for one year.

According to him, people in the communities continued to destroy the forest with impunity for their livelihoods.

“We need to protect the earth against further degradation caused by human activities, promote sustainable resource use at local and national global levels”, he added.

Togbe Kwasi Draft, Paramount Chief of Anfoeta Traditional Area, in his remarks lauded the efforts of the NGO, adding that it was a welcome initiative which must be encouraged.

He pledged his full support and gave the assurance that, the community members would take active participation in their next communal work.