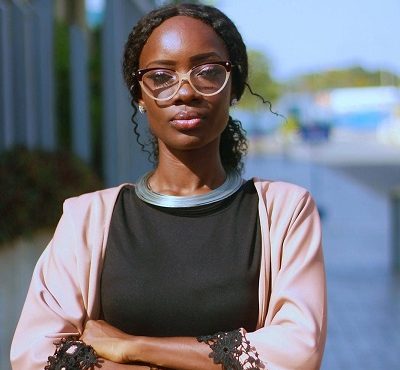 Grenda Addo is a fashion entrepreneur with a difference. She creates unique designs and has  chosen to go beyond pageantry to help create a positive impact in society.

Each year, she and her team of volunteers organise the “Splendour Charity Fashion Show” which brings together fashion designers, models, make-up artists and other players in the industry to display their creativity.

But it does not end there. The proceeds of their annual event are used to support less privileged children, including those living with cancer and other debilitating health conditions.

They provide stationery and financial support for those living in residential homes. At other times, her team reaches out to street children and provides some basic needs, including food and water.

The generous designer has been in the industry for the past six years until she re-branded about two years ago.

Grenda holds a Bachelor’s Degree in Fashion Design from Radford University College in Accra and decided to start her own fashion brand after completing National Service in 2018.

Speaking to The Spectator, the lady from Kumawu in the Ashanti Region said she was still laying a solid foundation for the ‘Grenda Addo’ brand which she expects to be recognised globally in the years ahead.

According to her, she already had a flair for design and had been designing bags and other accessories on a small scale before pursuing higher education to polish her skills.

She said that her non-governmental organisation, Splendour Charity, with five committed members, started in her first year in the university because she believed there was more blessings in giving than receiving.

With support from sponsors and volunteers, they host the shows and subsequently identify social projects which could be executed with their limited resources.

Though the journey has been challenging, Grenda noted that her charity organisation was helping her brand name resonate well with a lot of people in Ghana, especially the national capital, Accra.

In addition to organising the runway shows, Grenda again puts up colourful designs that attract and receive commendation from patrons.

She offers professional advice and continues to meet the expectations of individuals who patronise her works.

The ‘Fashionista’ explained that her interests were in women’s clothing but she would want to pay some attention to children’s outfits in the near future.

“The curiosity to find an exquisite but less expensive outfit inspired me to design dresses that are usually worn by women on the red carpet.

“Some clients come with their own ideas in mind but after some assessments and the insight I offer, most of them choose what I recommend for them and I think I am making an impact,” she said.

The Entrepreneur, aiming to expand her business, admits that social media has been a big boost for her, despite initial challenges in starting up.

“When I had the idea, I was still a student. Though I had a supportive family, getting capital was not easy. It was the moment of looking for capital that I decided to start Spledour Charity,” she noted.

Grenda has a few employees currently and intends to employ more hands when her operations grow bigger.

She acknowledged the financial hurdles and stiff competition in her line of work but said she would continue to “take inspiration from other successful players in the industry.”

“Everybody is unique in their own way, so I rather prefer to share ideas with successful people in the industry, and also seek the opinion of other people also,” she said.

The old student of Accra Girls’ Secondary School insisted that she will improve on her expertise but would not stop fashion design anytime soon.

Grenda and her team, this year, supported some street children during the three-week lockdown and are yet to host a major fashion show when COVID-19 is brought under control.

The member of Light House Chapel International encourages young people to harness their skills and continue to seek the face of God in all endeavours.

She maintains that fashion entrepreneurship is the “best decision” anybody can make, provided they have the “passion, vision and tenacity to embark on a journey in the challenging industry.”