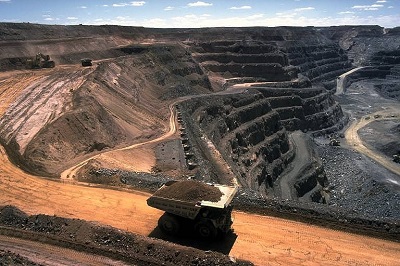 Buried in both the belly and surface of the earth God has blessed Ghana with are numerous minerals resources which are needed to propel the growth of the local global economies.

The minerals nature has endowed the country with   include diamond, gold, bauxite, manganese, clay, sand, limestone, just to list a few.

These minerals continue to fuel the growth of the Ghanaian and the global economies,   which  served  as a source of raw materials for industries  in automobile in the manufacturing, building and  construction, pharmaceuticals, Information and Communication Technology industries  just to mention a few.

Geological data from the Ghana Geological Survey indicates that Ghana is rich with gold and other mineral resources, which are yet to be exploited.

No wonder, the whites who first came to the country about a century ago named the country Gold Coast.

For several decades, Ghana mined for gold, diamond and other minerals which have helped to attract millions of dollars into state coffers and created thousands of jobs for the citizens.

Indeed, mining has been and continues to be a major backbone of the Ghanaian economy, providing the country needed foreign exchange, to import the essential products the country cannot produce and also support the stability of the local currency, the Cedi.

To state that, the mining industry has been one of the levers the economy rest and a fulcrum the country revolves around, is not an understatement.

Every year millions of dollars are injected into the mining industry in particular and the country in general through exploration,  procurement of machinery, mining license, investment in existing mines and paying of royalties.

It must be stressed that before the coming of the whites and multinationals into the country’s mining industry, our forefathers were mining for gold, albeit on a small-scale.

Their type of mining was christened   “gather and sell,” which has been corrupted “galamsey,” and was done on a sustainable basis with little negative impact on the environment.

As indicated early on mining continues to be a good catalyst for the country’s socio-economic development.

According to the 2020 Annual Report of the Ghana Chamber of Mines (GCoM), Ghana last year continued to hold on its position as the largest producer of gold in Africa and the sixth in the world even though the country recorded a decline in output by 12.1 per cent.

The GCoM 2020 report further revealed that figures from the Ghana Revenue Authority showed that the mining and quarrying sector regained its position as the leading source of direct domestic revenue in 2020.

The Mining industry continuous to be leading source of foreign exchange and merchandise exports for the country.

“The mining industry remained the main anchor of Ghana’s trade balance as data from the Bank of Ghana showed that the mining sector was the foremost sources of foreign exchange receipts in 2020.  The mineral sector alone accounted for 48.4 per cent of gross merchandise export in 2020,” the GCoM report said.

The millions of dollars that have poured into the state kitty from the mining industry appear to have little impact on the development of the country and mining communities.

The revenues which have  accrued to the state from the mining industry has been expended on recurrent expenditure, instead of capital  projects which have the capacity to  generate better returns.

Johannesburg in South Africa has been transformed through mining, but the same cannot be mentioned about Obuasi, which is a pale shadow of itself, albeit, gold has been mined in the town for almost a century.

Mining communities in the country continue to suffer poor roads, social amenities and lack of good source of drinking water, even though they bore the brunt of the effects of mining such as environmental pollution, and loss of livelihoods.

There have been numerous agitations from mining communities for improve roads, potable water and social amenities.

Although the state has passed the Local Content Law to make it obligatory for the mining companies to procure their supplies locally; there has not been any deliberate state policy intervention to support the local production of mining supplies.

Until the recent  establishment of the Ghana Integrated Aluminum Authority to refine the country bauxite resources, little is being done to add value to the country’s mineral resources for export.

From the current arrangement and scheme of things, the state is losing from both ends, because the mining industry currently is largely controlled by foreign hands and most of the mining supplies for the industry until recently were imported.

The government can enter into public-private-partnership with local companies to produce the supplies, which may not be capital intensive,  for the mining companies.

This way, the country will retain millions of dollars which is used to import the mining supplies and also help integrate mining to the local economy to create jobs, and spur the growth of the economy.

Interestingly to note, the GCoM and the mining companies have led the way and supporting some local companies to produce some mining supplies locally.

For the country to fully benefit from the mining and its mineral resources, government must enact a policy to ensure that value are added to the minerals mined in the country.

The Institute for Fiscal Studies (IFS) has suggested that government must purchase controlling interests in the large-scale mining companies.

In its latest report titled “The Role of the Extractive Sector in Ghana`s Comparatively Low Public Sector Revenue Mobilization,” IFS said government must aimed at having fully state-owned firms operating in the mining sub-sector.

It said government must renegotiate with mining companies, arguing that the current mining agreements had been crafted to favour multinational mining firms.

According to IFS, Ghana was making only ten per cent from its mineral resources, unlike Botswana, which is making about 50 per cent due to government active participation in the sector.

Recently in an interaction with the Chief Executive Officer(CEO) of the GCoM, Mr Sulemanu Koney, he said there must be a deliberate policy by the state to harness mining for the broad-based development of the country.

“The catalytic role of mining is what we should be talking about as a country,” he said.

The CEO said government must set out a vision as to how it wants to capitalise on mining to develop the economy.

Mr Koney suggested that efforts must be made by the government to position the mining industry and develop growth poles on strategic industries around mining to drive the various sectors of the economy.

Countries such as the United States developed on the back of mining and Ghana must pursue same to develop the economy.