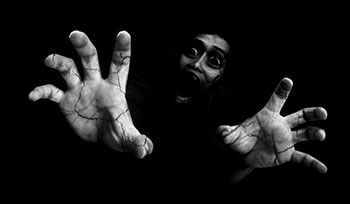 In her dream, a man went to stand at her door and asked for a bottle of water. She told him she only had one sachet of water and he started laughing. She woke up with a start and could still hear the laughter.

She initially thought it was Fridman but that wasn’t his voice too. Convinced she was still dreaming, she closed her eyes and tried to sleep again but the laughter became hysterical and then she heard a knock at her door.

“Gizelle, I don’t know who is in there with you but can he tone it down? I want to sleep.”

That made her eyes fly open because she was alone and she could hear the laughter outside the room and not inside.

“But there is nobody here except me and I can hear the same laughter but it’s from outside the door and not inside here.”

Immediately, the voice stopped. She got up to open the door and felt an instant attraction but she curbed it. Fridman was a very cute guy and she really had a soft spot for cute but because they’d both agreed to just remain friends, she didn’t want to rock the boat.

They both agreed that maybe it wasn’t anything. Perhaps a figment of their imagination and went back into their rooms.

The next day, there was no incident but in the evening, Fridman could hear loud snoring. He hated snorers but decided to let it go because Gizelle was exhausted after painting 2 of the bedrooms and putting wallpaper on part of the living room walls.

The following morning, he teased her about her snoring and she told him she’s never been accused of snoring, ever. He teased her that he was sure her bedmates hadn’t wantto let her know how much she probably disturbed them.

They both suspected there was something terribly wrong with the house they were in but convinced themselves it was nothing. They refused to utter their suspicion to the other thus they both thought it must be a figment of their imagination.

It all reached a head that night when Gizelle suddenly woke up with a start. She’d seen the man laughing again and had woken up. She was shocked to see all the windows and doors in her room open.

She quickly closed them and as she was about to close the bedroom door, she noticed that the main door across the hall way was also open. She ran to close it yelling out Fridman’s name. He also woke up and saw that all his doors and windows were open.

They both thought armed robbers had entered and quickly secured the place whiles looking out for burglars. There was none but nobody could explain why all the windows and doors were open.

Gizelle was so disturbed that she couldn’t sleep a wink. Fridman was scared himself but didn’t want to let it out.

He asked her if she wouldn’t mind sharing his bed and she readily agreed. They both slept in each other’s arms and woke to find the room flooded. The tap wasn’t on when they slept but it was, when they woke up.