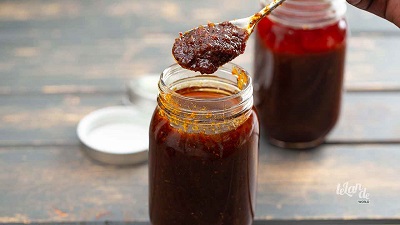 Information available to this paper indicates that some unscrupulous dealers in hot pepper sauce (shito) in Accra are said to be selling contaminated product to the unsuspecting public in order to make more profit.

It is alleged the “shito” is usually made with unhygienic and discarded fish heads and scales of dried herrings (amane or Keta School boys) for sale.

But a trader at the Kaneshie Market (name withheld) in Accra, confirmed this in an exclusive interview with The Spectator when this reporter took it upon herself to interrogate the veracity or otherwise of the issue at stake.

She said the “shito” makers purposely came to the market to buy these discarded parts of the herrings and add a few uncontaminated ones to it before grinding them together in a near-by mill.

She said these illegal and criminal activities had been going on for a long time, but it was only now that, she had got the courage to expose them, following the COVID-19 outbreak which calls for consumption of healthy foods.

“I have always wondered why some hot pepper sauce (shito) bought from the market had so much sand in it,” a customer lamented.

“I was disappointed when I saw dried fish heads and scales poured on the bare floor and flies hovering all around it just in front of a fish seller’s basket at the Kaneshie market,” another said .

The  informant said she approached the fish seller and asked her if the fish scales and heads were for sale and she responded in the affirmative.

Still surprised and wanting to know more, “I asked her what it was used for and she said “for shito.”

According to her, that was what most “shito” makers used in preparing their product .

Many health experts had predicted that, disease would hit consumers harder if the high level of insanitary conditions in the markets were not addressed.

In a telephone interview with a senior health official at the Accra Metropolitan Authority (AMA) who pleaded anonymity, he confirmed that they had received reports of some women making “shito” with unhealthy and discarded fish parts.

He gave an assurance that their health officials would go round some of the markets in Accra to check on these aberrations and those found culpable would be brought to book or prosecuted in the law courts.

Dr Kojo Cobba Essel, a Medical Doctor and Chief Executive Officer of Health Essentials Limited, commenting on the subject was of the view that if the traders used only a part of the fish that is edible then there is no problem.

But “if (the traders), indeed, used fish scales then that should be a cause for worry because the “scales are not digestible,” he said.

He explained that the presence of sand in the hot pepper sauce (shito) could cause stomach disorders as the sand may contain other impurities.

For this reason, Dr Essel stressed the need for food inspection agencies to step up their game by conducting random checks at the markets and, where neccessary, issue warning whenever they identified contaminated products.

“Not everybody can go to the high-end places to buy their “shito”; many people would still buy from the street. So we are at the mercy of the enforcement agencies. Once they identify and blacklist people [through enhanced surveillance], those who sell unwholesome products would refrain from the practice,” he noted.

He has therefore advised individuals to prepare their own hot pepper or black sauce (shito) at home, if they can, or allow someone they trust to prepare it for them.