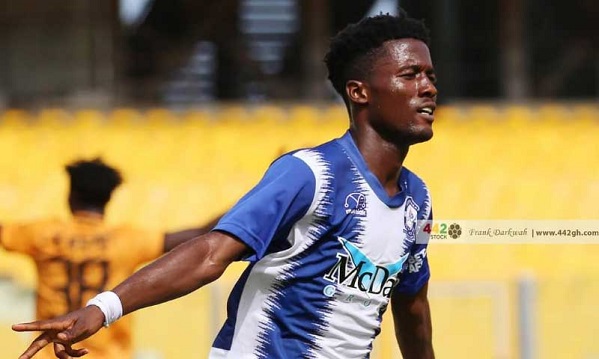 Ashie Quaye – Can pose problems for the Hearts backline

Week Two of the betPawa Ghana Premier League (GPL) will be lightened up with a clash between local rivals Accra Hearts of Oak and Accra Great Olympics tomorrow at the Accra Sports Stadium.

The two teams were scheduled to face off in the Ga Mantse Cup last month, but local fans had to wait to see their favourite teams clash following a couple of uncertainties surrounding the encounter.

The wait, however, is over as the two would settle their scores in a league encounter for the bragging rights and the three points at stake.

Olympics have had the best of their opponents in recent times and will go into the game attempting another victory in a bid to continue their bright start of the season.

They would also rely on the leadership of Emmanuel Agyemang Badu and the enterprising prowess of Samuel Ashie Quaye to clinch another three points.

However, Hearts would be seeking revenge and also look out for a win to set their campaign back on the right track after losing their opening game to Aduana last weekend.

With the likes of Daniel Afriyie Barnieh and Gladson Awako ‘ready to roar’ Hearts would go into the game certain of giving Olympics a run for their money.

The weekend round of matches, however, began yesterday and would continue today with a clash between Dreams FC and newly-promoted Kotoku Royals at Dawu, while Karela would play as guests of Accra Lions.

At the Tamale stadium today, Tamale City will clash with Legon Cities, while Medeama welcome Real Tamale United (RTU) to Tarkwa for another mouthwatering encounter.

On Monday, Samartex take on Berekum Chelsea with King Faisal and Aduana Stars rounding up Week-Two with an interesting encounter at the Baba Yara Sports Stadium.