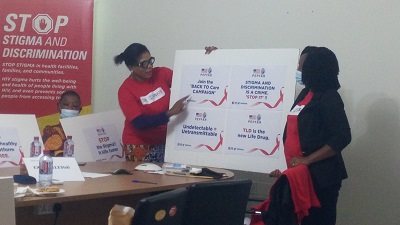 HIV and AIDS advocates have reiterated calls for the public to offer support to people living with HIV in the communities to help them recover and live their normal lives.

They stressed that understanding the situations and conditions of affected persons would help reduce stigmatisation and discrimination in the society.

“Having HIV is not a death sentence. It’s not that they got infected through prostitution or make you are a prostitute.We need to reduce the stigma for people to come for the test and reduce the defaulting statistics.” Ms Dzid Enyonam Kwame, Media Specialist on the US President’s Emergency Plan for AIDS Relief (PEPFAR) project said.

She made this observation at an engagement with queens and religious leaders at Takoradi in the Western Region, last Wednesday, to highlight the need for key stakeholders to act as agents of change in helping to reduce stigma and discrimination.

Ms Kwame described defaulters’ rates in treatment due to stigma and discrimination as worry, adding “We are trusting you to support us to achieve the targets”.

‘We can’t do  it alone We need you leaders  in  our communities in achieving targets   in Anti- Retro-viral Therapy (ART) support programmes.Together in our collective efforts, we can effect change in  our communities.”She stated.

She advocated that discrimination at health facilities must also stop, saying “HIV stigmatisation hurts the well-being and health of people living with HIV and even prevents them from accessing treatments.”

HIV and AIDS Ambassador, Ms. Charity Owusu-Darko also said societal support to persons with the HIV and AIDS conditions was key in managing the disease and giving hope to affected individuals.

The disease condition, she claimed, could be compared with hypertension, diabetes and all other chronic diseases and called for proper management of cases to save the patients.

The ambassador said:” I have lived with HIV for the past nineteen years but because I have been constant on my drugs, I am still strong and going about my daily business. If I don’t disclose my health status, you will not know I have the disease.”

Ms. Owusu-Darko mentioned that stigma and discrimination against affected persons had not enabled society, families and religious groups to do their best in helping them to continue with their medication, and thereby worsening their conditions.

The Senior Social Mobilisation and Advocacy Advisor of USAID Strengthening the Care Continuum Project, Mr Benneh Diawuo, said the project hoped to reach lots of affected people by September this year, under the 95-95-95 targets.

The targets, he told the participants, hoped to get 95 per cent of people to know their statuses, be on drugs and have viral suppression.

Again, he said, the project target strategies included behavioural change through information and education and believed that the collaboration with queens who are key stakeholders would help reduce the HIV spread.