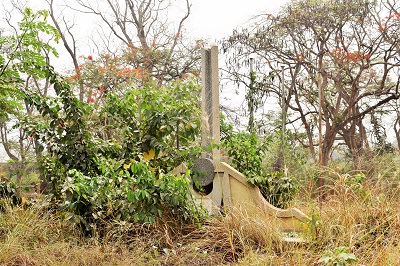 The cenotaph constructed at the Old Durbar Ground at Ho almost a quarter of a century ago in honour of fallen war heroes, is still in a horrible state .

The Spectator embarked on a campaign about the two years ago to have the monument restored to serve its appropriate purpose but nothing had since been done about it.

Now the cenotaph is hidden covered by weeds.

Worse is that, some unpatriotic members of the public make their way through the weeds to either defecate or urinate around the cenotaph.

Others also dump wastes around it with impunity.

Meanwhile, rodents and reptiles are multiplying rapidly around the cenotaph which is an affront and great dishonour to the war heroes.

The structure was constructed by the Volta Regional Coordinating Council  (VRCC) in 1996, at the cost of GH¢9million.

It served as the venue for the celebration of Remembrance Day and other events of the security agencies.

After some years, the cenotaph was left to decay, fade and fall into oblivion, contrary to the purpose for which it was built.

In the absence of a cenotaph at the Jubilee Park, however, the wreath laying ceremonies now take place around make-shift wooden structures.

The stench emanating from the excrement around the monument poses public nuisance.

The old Durbar Ground itself is now a bushy field where some young people go hunting for rats, although it could be maintained to host smaller events.

“This is a big shame”, a visitor to the placeremarked.

Investigations conducted by The Spectator prior to filing this story revealed that the Old Durbar Ground is a state land and, therefore, falls under the management of the Volta Region Lands Commission.

When contacted recently, a source close to the commission, explained that the maintenance of the ground was specifically the responsibility of the user-agencies which had acquired it.

The source, however, could not disclose immediately the user-agency in-charge of the ground.