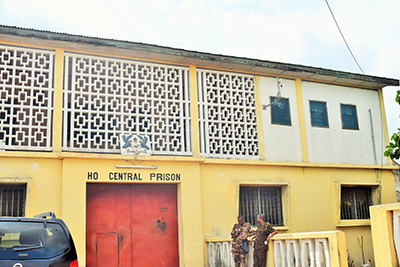 Inmates at the Ho Central Prison have been agitating for an outright pardon from the government after three prisoners and six officers tested positive for COVID-19 sometime in July and earlier this month.

They insisted that their crimes did not warrant the death sentence and that they have served substantial time for their offences.
This prompted a medical team from the Ghana Prisons Headquarters in Accra to carry out a training programme recently for the inmates as well as the officers on ‘COVID-19 Risk Communication’ to allay their fears.

When contacted on Wednesday, however, DDP Andrews Dzokoto, Deputy Director of Prisons in-charge of the Volta Region said that the COVID-19 cases had all been treated and that there was currently no case of the virus at the prison.
He said that the initial cases which were recorded among two convicts were mind-boggling because they were not leaving the prison for any hard labour outside.

The third prisoner often went outside to work at the auto-mechanic base of the prison, DDP Dzokoto told The Spectator.

Now, officers who returned to work after their leave were quarantined and monitored for two weeks before they were allowed into the prison yard again, DDP Dzokoto said.

He disclosed that as soon as the cases were detected, the prison medical team linked up with the Volta Regional COVID-19 treatment centre, near Ho and another centre at Hohoe and their collaborative efforts yielded rapid and positive results.

DDP Dzokoto said that there were now 381 inmates at the Ho Central Prison, adding that, “We are still not admitting new convicts here.”
He told The Spectator that new convicts were now sent to the Kete Krachi Prison in the Oti Region.