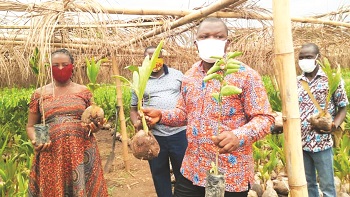 The Ho West District Assembly has launched the ‘One Household One Fruit Tree’ initiative to support nutrition, beautify the environment and address climate change.

This coincided with the handing over of more than 2,500 coconut and 1,500 citrus seedlings to the District Directorate of Agriculture by the DCE, Mr Ernest Victor Apau on Tuesday.

The seedlings are meant for distribution to 200 farmers in the district.

Mr Apau also announced that the district assembly was also set to distribute 100,000 cashew seedlings to registered farmers in the district.

Already, the assembly has distributed 20,000 Afram tree seedlings among the various communities for planting along the banks of 32 water bodies in the area.

The tree planting exercise, Mr Apau said, had so far covered the banks of 26 rivers and streams.

The DCE hinted that another initiative, ‘One Electoral Area One Nursery,’ would take off in August in all the 25 electoral areas to enable farmers to have easier access to seedlings.

Mr Apau specifically mentioned citrus, cashews, mahogany, coffee and cocoa among the seedlings to be produced at the nurseries in large quantities.

He said that the assembly would leave no stone unturned in making agriculture attractive to the youth.

Mr Seth Rashid Asuo, District Director of Agriculture gave the assurance that the welfare of the local farmers would always be treated with priority.

He entreated the communities to support the various initiatives with great zeal and enthusiasm to build a sound environmental foundation for the future generation.

Queen mothers from the various communities in the district, who were present at the function, pledged to throw their weight behind the initiatives.