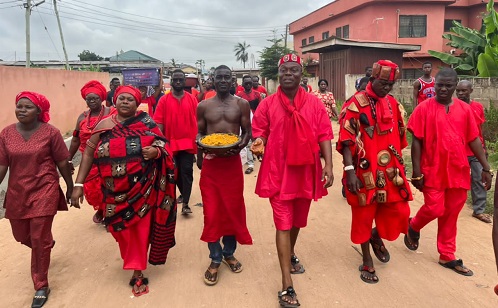 The chiefs and people of Abofu near Achimota, last Saturday marked the Homowo festival with sprinkling of Kpokpoi at the heritage sites in the area.

Thus, Abofu community which forms part of the 92 settlements under the Gbese Stool together with the other settlements marked theirs on Saturday, August 20, 2022, with the support of Nii Ayibonte II, their Supreme Leader.

Since it was their first time of marking the festival since Nii Ayikwei Osaman I, and Naa Ayikaikor Odanta I, were enstooled the emissary of Gbese Mantse, Nii Amorkpa, Agbogbloshie Mantse came to assist with the sprinkling of the Kpokpoi.

But the sprinkling of the Kpokpoi was restricted to Vugevuge Koo Wulu (a heritage site) without parading through the streets as a sign of respect to the people to get used to the pomp and pageantry accompanying the festival subsequently.

In an interview with Nii Osaman, when the team of the celebrants had returned home, he commended the people for the support given them since the celebration was the maiden one in the community since assuming office.

He called for peace and unity amongst the people and the traditional leadership to accelerate development.

Naa Odanta on her part said their first year on the stool saw a cordial relationship between the traditional administration and the people such that it fostered mutual cooperation for development.

She urged the people to continue to support them to chalk success by ensuring that every child of school going age got enrolled to increase literacy rate in the various communities.