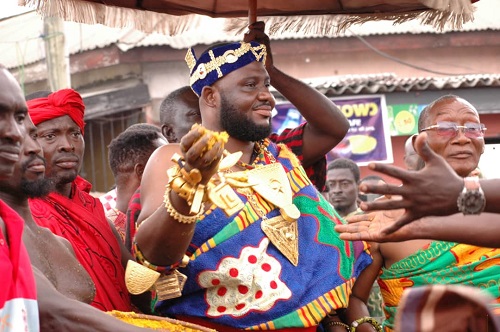 The Otublohum Dadeban Naa, a traditional division of the Ga State in the Greater Accra Region has marked this year’s Homowo in unity under the auspices of the Supreme Head of MantseAnkrah Royal Family, Nii Adjabeng Ankrah II.

Homowo is a festival celebrated by the Gas who in their quest for harmonious location, died of hunger on their way from Israel, Egypt, Sudan, Cameroon, Nigeria, Benin, Togo until they reached their final destination “Akra” popularly known as Accra.

NiiAdjabenAnkrah II said that peace was an important element for the progress of the Ga State, and for the indigenes to live as one people with a common agenda for both human and infrastructural development.

He sprinkled “kpokpoi” a traditional meal used for celebrating the festival on the streets of Ga Mashieto acknowledge the dead who fought for stability and peace.

The principal streets of North and South Industrial areas in Accra which belong to Otublohumwere also sprinkled with “kpokpoi” as custom demanded.

Nii Adjabeng Ankrah II, who would mark his sixth anniversary in November 2022 on the stool has been phenomenal in settling disputes, among others.

Diplomats, tourists and people from all walks of life were present to witness the Otublohum Dadeban-Naa Homowo 2022 celebration.

Principal Elder of Mantse Ankrah Royal Family, MrNiiAyiAnkrah, told the public not to associate the celebration of Homowo with diabolic meanings because it was a tradition to be cherished by generations.

“We need to hold onto our culture in order to see a progressive Ga State because the Ga people have rich cultural norms that need to be cherished and preserved,” he said.