Hunting for proper ‘Knights of the Whistle’ 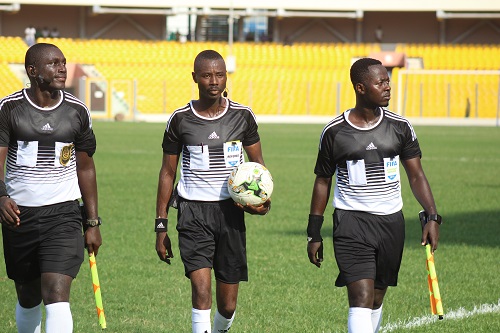 Officiating is the rock-layer of every sporting endeavour – peculiarly football.

The sear of anguish and the torrent of pain of the May 9, 2001 disaster that recorded 127 deaths at the Accra Sports Stadium during a Premier League game between Hearts of Oak and Asante Kotoko, is still freshly etched on our minds.

Indeed, referees are the lifeblood of the game and wield a lot of power and authority as to making and unmaking the game with their kind of decisions.  When the referee performs creditably well, he is lauded by the majority of supporters – even if their clubs lose.

On the reverse, the officials are given a bad name and hanged when they perform shoddily.

Indeed, the most unpleasant thing a club can experience is to suffer defeat through a bout of biased officiating!

Such cases are replete in our various leagues nationwide. It is almost a weekly trauma for some of the clubs that have no option, but to bear the agony and go through the painful motion.

Distressingly, the perpetrators – the centre referees and some of the assistant referees, have almost always walked away scot-free to enjoy their booties (bribes) – not giving a damn to the ‘carnage’ they may have caused.

Many of such disgraceful officials have been weeded out by the ‘Number 12’ Anas Aremeyaw Anas’ investigative piece. The rest may be hanging around to strike when the iron is hot. They have to be smoked out and cleared from the system in order to give football a new lease of life.

That is why one was highly thrilled to learn of efforts the Ghana Football Association (GFA) is taking to replenish its stock of referees – badly depleted after the Anas’ work that affected a decent number of the nation’s top brass.

About 75 referees were affected by the investigation as the ‘knights of the whistle’ were caught on camera collecting bribes to plunge the game into disrepute.

Later, the Referees Association of Ghana (RAG) emerged that it had exonerated 14 and suspended or banned 61 referees because there was no evidence beyond reasonable doubt to validate allegations of corruption and bribery against them.

CAF and FIFA had already banned the referees on the list of the RAG.

Subsequently, the body splashed out 10-year suspensions to 53 referees and banned another eight for life after studying footage from the investigation, and 14 referees who appeared in the video were deemed to have no case to answer.

That is how badly bruised the refereeing situation in Ghana is; something the Referees Manager of the GFA – Alex Kotey – says he is fighting tooth-and-nail to reverse.

The GFA last Tuesday launched a ‘Catch them Young’ refereeing project to help recruit a new generation of young, budding and talented referees for the country.

Under the tag-line ‘Catch them Young Refereeing Policy,’ the move was to help replenish the stock left after the Anas exposé. Only three FIFA referees from the old stock – namely Daniel Laryea, Latif Adari, and Paul Atimaka, survived the ‘inferno.’

It is heartwarming to note that 10 new young promising referees are said to have managed to meander their way onto the FIFA list.

“Identifying young budding talents from the Senior High Schools (SHSs) and the tertiary levels and helping them develop the love and skills for refereeing and imbibing in them the spirit to upholding the integrity of the trade from this stage is one sure way of securing the future of refereeing in the country,” Mr Kotey asserted.

Steadily, Ghanaians were beginning to believe again in the local referee before the COVID-19 pandemic struck to put the season to ‘sleep’ in mid-March, this year.

One must add, however, that in its bid to stock up the referee deficit, the FA must make it a matter of urgency to institute a ‘snake-pit’ inquisition into their backgrounds. It is a crucial call!

Indeed, it is dangerous to open the doors to people whose backgrounds you are not certain of to join the noble world of officiating.

The integrity of referees in this country has been battered – though not beyond repairs – but we must ensure we do not worsen the situation. This is why the FA must do a lot more to fetch referees with integrity and moral uprightness into the fold as it charts a fresh course to bring sanity into the game.