Illegal entry into Ghana: 51 foreigners deported …after being intercepted at Asikuma Inland Check Point in V/R 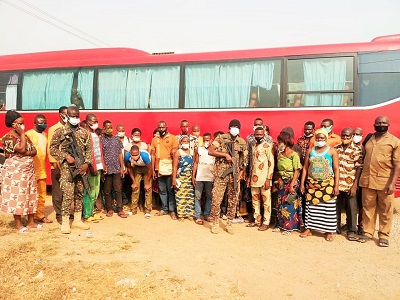 Forty-Nine Beninois and two Togolese who allegedly entered Ghana through unapproved routes earlier this month have been deported.

This was after personnel of the Ghana Immigration Service (GIS) at the Asikuma Inland Check Point intercepted the Hyundai Universe Express, AW 9955-19 on which they were travelling from the Volta Region towards Accra, last Wednesday.

A GIS spokesman disclosed these to the Ghanaian Times in Ho at the weekend.

He said the arrests were made after the occupants of the vehicle were subjected to a thorough scrutiny during which it was found that they entered Ghana from Togo by flouting the official border closure.

The spokesman said that the travellers who included 36 males and 15 females admitted that they were assisted by some ‘okada’ operators to gain access into Ghana from the other side of the frontier.

The travellers also said that they were heading for Ivory Coast to seek greener pastures.

After they were taken through COVID-19 screening, the travellers were sent back to Lome, the spokesman added.

Meanwhile, the GIS Command in Volta Region has entreated travellers going through the Asikuma Sogakope Inland Check Points to cooperate with the current strategic security arrangements aimed at tracking down illegal immigrants in those areas.

Pix: The deportees under escort by armed GIS personnel