Indecency in the name of fashion? 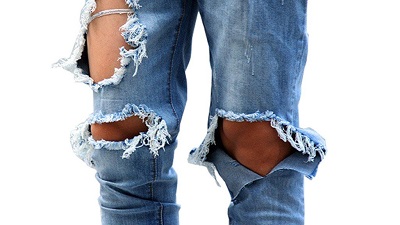 The purpose of clothes is to cover our bodies, but presently, the youth would rather wear transparent and tattered clothes and term it as “slaying” or “drip”.

Funnily enough, these transparent and tattered clothes are more expensive than regular or let me say, “full coverage” clothes. I went through Instagram and the prices were shocking.

I happened to come across a lady, who was wearing a pair of tattered jeans trousers, that had an open front (the whole thigh to ankle area was bare), even her bum area, was tattered.

I asked myself this question: What had happened to morals? Have people forgotten that, the way we dress, speaks a lot about us?

Braids among men, seem to be common amongst the present day youth and some women also have multiple piercings to the extreme of piercing their nipples and clitoris.

Some adults and popular persons who dress this way, take pictures and post on social media platforms. Others wear inappropriate clothes to church and when asked, they say: “Worship is from the heart and not with what you wear”.

We have copied Western cultures but do we see these people we are copying from, go the extreme we are going? Indecency has been covered up with the term “fashion” by the present day youth.

Social networking has now gained grounds and become a driving force on its own. Inasmuch as social media has done us some good, it has, to some extent, caused us to compare our lives with others.

Many people tend to think or assume that posts made on social media reflect in real life when in actuality, most of them are ‘staged events’.

A lot of people have built a certain personality online which doesn’t correspond with their lifestyle in real life and it is sometimes tempting to think that some colleagues are doing better than you.

As it appears that some people are manipulated or influenced by things they view on social media, it is important to provide support for young people who find themselves in this ‘quagmire.’

Parents need to monitor their children who are exposed to social media and lookout also for signs of depression, anxiety, misbehaviour, and among others.

Parents should learn to appreciate the efforts of their kids. Encourage them, teach them to believe in themselves, and become positive-minded individuals.

Individuals should follow people who share the same values and interests as theirs and do well to avoid people who indulge in unhealthy activities such as drugs, alcoholism, among other negative things.

It is important to follow positive things only and try to network with people who have the same interests.