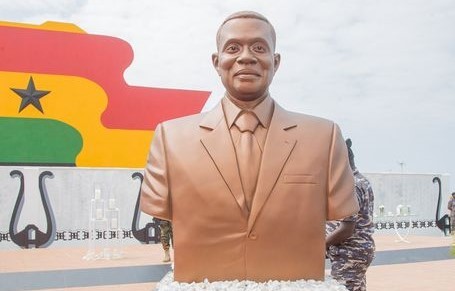 The Minority Leader has said that it is offensive that a bust unveiled to honour the memory of the late John Atta Mills’ 10-year anniversary of death does not bear his own name.

Haruna Iddrisu, addressing the press at Parliament, said it was disappointing to see the new bust bearing the names of President Akufo-Addo and Koku Anyidoho and not that of the late President.

Citing the monument of Dr Kwame Nkrumah, the Tamale South legislator said the statue of Ghana’s first President bears his name and nobody else.

As such, it is unacceptable for a sculpture honoring a particular person not to have his name but that of the person who unveiled it and other supporting parties.

“The bust of him, John Evans Atta Mills, our respected President, beneath the bust is not his name. It is that of President Akufo-Addo and that is not his [Atta Mills’] name and we find that incredibly unacceptable and offensive,” he fumed on Monday.

Mr Iddrisu subsequently tasked government to immediately correct the inscription on the bust by removing the names of President Akufo-Addo and Koku Anyidoho.

The Tamale South legislator warned that had it not been for the peaceful nature of the former President, he would have gone there and removed the inscription himself.

“The President and his associates must take immediate steps to go and correct that wrong and that anomaly.

“We find it incredibly unacceptable and incredibly offensive but for the peaceful nature of the late John Mills, I would have just walked there and changed it myself. But that will not be in honour of the late J. E. A. Mills and I learned peace from him,” he noted.

According to him, the change is necessary to educate people who do not know about the peaceful and patriotic former leader.

“Persons who visit the Asomdwee Park must know that it’s the final resting place of the late John Evans Atta Mills who passed on in office and to his eternal memory, this bust has been mounted.

“How then, can any of you explain that just beneath the bust you will see who unveiled it and who supported it? If the change is not done, people will refer to him [Atta Mills] as Unveiled By,” he teased.

This is the latest controversy surrounding the celebration of the 10th anniversary of the former President’s death.

Prior to this commemoration, there was a feud between the family of the late President and Mr Anyidoho over the maintenance of Asomdwee Park, his final resting place.

Brother of the Former President, Samuel Atta-Mills, had accused the Mr Anyidoho of tampering with the grave of their kin.

“Now that you have gone to touch it, is the bother still in that grave? What did you put in the grave? What kind of ritual did you perform over there? Why would you go and touch the grave without informing us? Who has the body now? And that is the question I want to ask Ghanaians. Do you want to make us go through grief every time?”

But, Mr Anyidoho, dismissed the claims by the family.