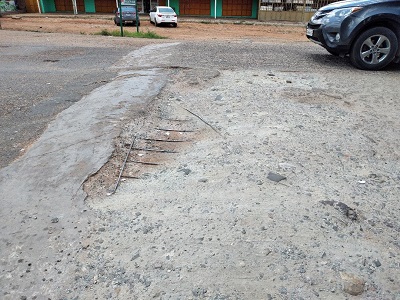 I humbly wish to request the Minister of Roads and Highways, Hon Akwasi Amoako –Attah, to investigate the construction of speed ramps at the Amrahia toll booth near the Ghana Christian University College on the Adentan- Dodowa road.

Though the speed ramps have been constructed less than one year, the two ramps have developed big pot holes which have compelled drivers to slow down, thereby creating traffic at the toll booth.

It is an undeniable fact that substandard materials were used in the construction of the speed ramps, thereby leading to their deterioration within a short period.

Motorists who use the road daily are of the view that the tax-payers money has not been judiciously utilised so far as the execution of this project is concerned.

There are some speed ramps which have stood the test of time and people are of the view that such a project should have been given to a contractor who has an enviable track record over the years, but not an amateur.

The construction of the speed ramps which will help in checking the speed of motorists as they approach the tool booth to pay their levy is to prevent the unfortunate incident of vehicles crushing into the containers from which the officials operate.

Ghanaians will be glad if the minister will find out issues pertaining to the process by which the contract was awarded, the track record of the contractor, the official who supervised and eventually certified the job among other relevant questions.

Since it is difficult to raise money through taxes to fund essential projects in the country, Ghanaians should not be deprived of getting value for money in the execution of projects.