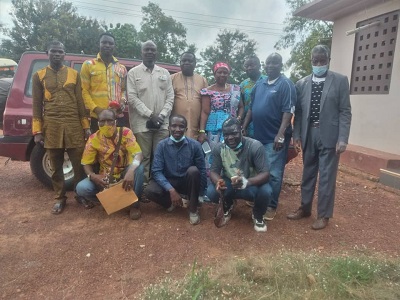 The Judicial Committee of the Greater Accra Regional House of Chiefs sitting at Dodowa on May, 25, 2021, have dismissed Prince Asharku Bruce Quaye’s application for a stay of proceedings, Pending the determination of a high court case.

He and Edward Adjiri Solomon (2nd respondent), were facing trial at the Regional house of chiefs after a petition filed against them by NiiOkpe family (King Makers) for performing rituals last year at KorleGonno, installing themselves as James Town Mantse, without involving the Okpe family.

The 2nd respondent, who was seen to be closer to be installed the James Town Mantse, voluntarily filed an application to the judicial committee on March 5, 2021, to be non-suited on the petiton, which was readily granted on March 26, 2021.

This followed his admission before the judicial committee that, he had never claimed to be the properly installed James Town Chief or Mantse but rather made a claim that he was a ryal who could become a chief one day at James Town.

The three-member judical committee chaired by NiiTettehOtu II, in dismissing Bruce Quaye’s application, held that, his application “did not show any special circumstances to warrant the stay of proceedings in the instant trial”.

“In that regard, the application for stay of proceedings of the trial of this petition is refused and same is hereby dismissed,” it read.

Other members of the judicial committee were King Prof. OdaifoWelentsi III, and GbetsolorNiiAshiteyAkomfra III.

The judicial committee had stated in its judgement that, the 2nd respondent, by applying to be non-suited, had closed the door to himself and would be “estopped from making claims against the petitioners as far as the Kingmakers of the NgleshieAlata James Town Paramount Stool and membership of the petitioners of Okpe family are concerned”.

The house has adjourned the case to June 15, 2021, for the continued hearing of the substantive petition.