Jayana Music collaborates with Support A Mother, Save A Child Foundation to organise breast cancer screening 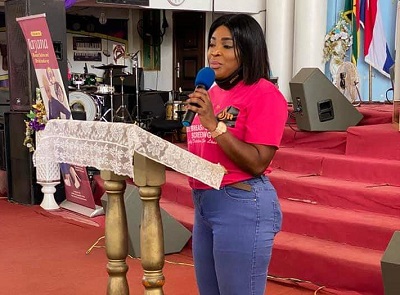 Sensational Ghanaian gospel artiste, Jayana in collaboration with Support A Mother, Save A Child Foundation has organised a free breast cancer screening help raise awareness about the menace in the country.

The screening which took place at the Christian Praise International Centre (CPIC) at Pig Farm in Accra attracted hundreds of participants who expressed appreciation to the organisers for the gesture.

Speaking to The Spectator Jayana said, she had always yearned to do something for her church and her fans and considering the season together with her team, they found it prudent creating breast cancer awareness.

“Giving back to the church and the fans are the reasons for which I partnered Support A Mother, Save A Child Foundation on this exercise,” she said.

Explaining their activities, she noted that the medical team examined the breasts and advised those having challenges to urgently seek medical attention to prevent any breast cancer in future.

According to her she was overwhelmed by the numbers which turned up and expressed her appreciation to God for giving her the strength to put together such a programme.

On other projects, she said her team was currently preparing to embark on some donations to the in orphanages and other vulnerable people among other, and host her concert in December.

Advising ladies, Jayana urged them to be observant and not take things for granted, on breast cancer related issues.