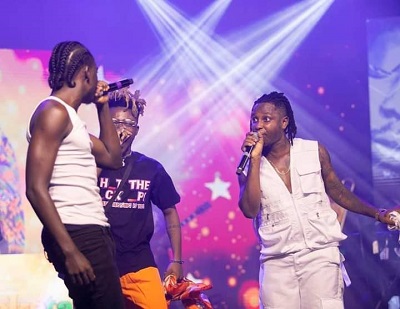 It was a charged atmosphere filled with excitement, at the Silicon House Production at Tesano in Accra on October 29, 2020, following the “outdooring” of “Blackstar”.

The release was heralded with a launch party which saw a lot of performances from topnotch musicians.

Many industry players who had filled the auditorium were mesmerised as the likes of M.anifest, Joey B, Kofi Mole, Kwamina MP,Efya, Fameye, among others jumped on the stage to prove their mettle.

Kelvyn Boy on the day was at his best as his irresistible voice ‘compelled’ everyone in the auditorium to stand on their feet throughout the performance.

Indeed, he established that he is the next big thing when it comes to live band performance and export of Ghana music as well as Afrobeat to other parts of the world.