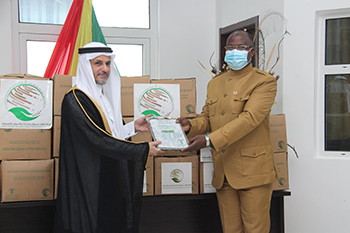 The government yesterday took delivery of 2,500 cartons of dates presented by the Kingdom of Saudi Arabia for onward distribution to selected Muslim communities across the country.

The annual gesture, indicative of the long standing relationship between Ghana and Saudi Arabia, is to help Muslims replenish their lost energies in the holy period of Ramadan.

Ambassador of the Kingdom of Saudi Arabia to Ghana, Meshal Hamdan Al-Rogi, handed over the gift which is the eighth donation to be presented to Ghana.

In a brief remark, Mr Al-Rogi, conveyed to government the compliments of King Salman Bin Abdul Aziz Al Saud, the custodian of the two holy mosques in Saudi Arabia, through whose benevolence the donation was made possible.

The Ambassador recounted the existing bond of friendship between both countries which had culminated into strong cultural and economic ties to the benefit of citizens in diverse ways.

According to him, the date fruit which remained Saudi’s most treasured natural resource serves not only as food to beneficiaries but had medicinal value to boost one’s health.

“The fruit is encouraged to be eaten prior to the breaking of the Ramadan fast because it is a natural energy booster, contains vitamins, minerals, dietary fibre and a rich taste to not only help Muslims replenish their lost energies but also benefit all Ghanaians across the religious divide,” he said.

Receiving the gift, a Deputy Minister of Foreign Affairs and Regional Integration, Mr Mohammed Habibu Tijani was grateful for the donation “considering the fact that dates are a national symbol of Saudi Arabia and also because it was personally from the custodian of the two Holy Mosques; King Salman Bin Abdul Aziz Al Saud.”

He noted that the Saudi government had over the years demonstrated trust and commitment in its relationship and dealings with Ghana.

“Due to the energy qualities of dates, its consumption during the month of Ramadan is very important and we appreciate the donation.

“We also acknowledge many other contributions made to other vital sectors of the country’s development, most importantly, health, education, energy, road, mosques and many more in the Muslim dominated communities,” Mr Tijani noted.