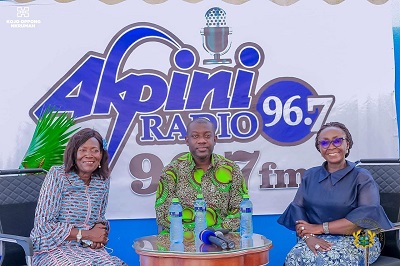 Minister of Information and Member of Parliament(MP) for Ofoase Ayirebi, Mr. Kojo Oppong Nkrumah last Saturday joined his colleague, Madam Della Sowah to unveil a new radio station for the people of Kpando, and its surrounding communities.

Mr.Oppong Nkrumah in his address said that radio was a powerful in helping to promote economic growth and development opportunities in every community.

For this reason, he encouraged the team to be professional and development oriented in their work.

The Minister thanked stakeholders for investing in such a project to promote development in the area.

On her part, the MP for Kpando, Madam Della Sowah also assured the people in the constituency that the new radio station would serve the interest of all.

According to her, it had been the desire of the people of Kpando for long, to also have their radio station and pressed God for making things possible in ensuring the birth of the project.

“Today is a very important day in my life to have the Minister of information here to grace the official opening of Akpini Radio,” she said

The MP further added that Akpini Radio would give the people in the municipality correct information on trending issues, impart knowledge, cure peddling of fake news and be the voice of the people.

She expressed appreciation to Mr. Kojo Oppong Nkrumah and MP for Ketu South, Madam AblaDzifa Gomashiefor taking time off their busy schedules to grace the  occasion.

The ceremony was attended by traditional leaders, Municipal Chief Executive of the area, Mr Joe Badasu , Heads of Department among other dignitaries.