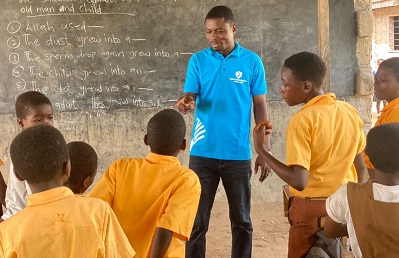 Musician and an Elder of the Church of Pentecost, Elder Kofi Opare has donated learning materials to Kwaboanta D\A Primary school in the Eastern Region.

The donation was done under the auspices of his charity organisation, Kofi Opare Movement, known as KOM Foundation, a Non-Governmental Organisation

He again donated cloths and others items to widows and have-nots in the community to put smiles on their faces.

Speaking to The Spectator after the gesture he said, schools outside the big towns in the country went through a lot of difficulties in their quest for the best.

He charged various stakeholders in the education sector to pay attention to schools in the villages.

The headmaster of the school, Prince Adu Marfo, expressed appreciation to KOM foundation for the donation and promised to put it to good use.