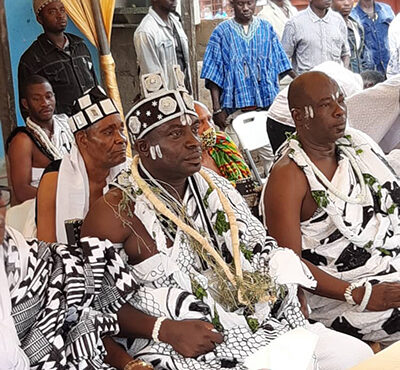 After 30 years of dashed hopes, despair and despondency, the people of Korleyman, near Medie in Accra have a new chief, called Nii Korley Sai Boni IV.
His successful confinement, swearing in and outdooring came off successfully last Saturday at Korleyman.

The new chief’s outdooring, was witnessed by the Queen Mother of Aburi, Awo Adwoa Amene II, Nii Amasa Oseiku II, the chief of Amasaman and Nii Papa Asa, the chief of Papase and a very large enthusiasts.

Nii Sai Boni IV, a contractor by profession, outlined many development programmes for the youth to curb unemployment and bring the much needed development to Korleyman, which had remained impoverished community for a very long time.

He expressed his appreciation to the chief of Aburi, Nana Otobuo Gyan Kwasi II and many others, who supoported and endorsed his installation as the chief.

Nii Sai Boni IV called for unity, support and cooperation of all and sundry, to make his reign successful and an example for other communities to emulate.

“Let us all put the past behind us and unite to speed up the development of our town”, he said.

Nii Osieku Amasaand the Aburi Queen Mother admonished the people of Korleyman to support Nii Sai Boni IV, to succeed as a chief.

The senior brother of the new chief and head of the family (Gyase) Abuusa Panyi, Nii Obodai said, Korleyman would witness massive development with the installation of the new dynamic chief.

He admonished him to smoke the peace pipe with all and sundry, who may have wronged him one way or the other.