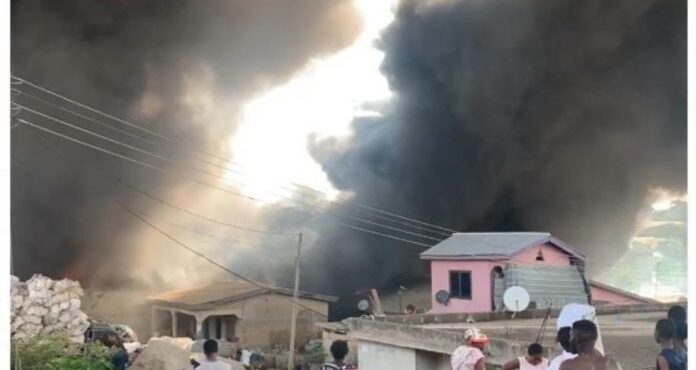 An 18-year-old student has died in a fire that swept through a plastic recycling factory at Kronum-Afrancho in the Afigya Kwabre South District of the Ashanti region.

Stephen Agyekum died in an attempt to control the spread of the inferno with a fire extinguisher.

Excessive heat, coupled with strong wind and smoke blocked his exit from the burning building.

The deceased, Stephen Agyekum, is a form one student of Adugyama Senior High School.

His friend, Joshua Asiedu Boafo Junior, says they had successfully removed a gas cylinder from the kitchen to avoid explosion.

But the thick black smoke from the fire blocked their view of the door.

Joshua managed to crawl out of the room, but his friend Stephen lost his way out.

Some residents made unsuccessful attempts to rescue him.

Stephen got trapped and died in the fire.

The inferno swept through a plastic recycling factory and spread to about 5 houses in the area.

Melted plastic, cooking utensils and burnt electrical appliances are in the debris of the fire.

The factory block and the apartment of the owner were burnt completely.

Abubakar Sulemana is a victim of the inferno. Four of his fifteen apartments got burnt.

The fire lasted for close to 10 hours before it was totally doused by firefighters.

Access route to the area and availability of water hydrants were major challenges for the firefighters.

Residents, however, applauded their efforts.

The Breman Fire Service Department had to call in reinforcement from four other fire departments in Greater Kumasi to help douse the fire.

He advised residents not to keep combustible materials in their homes.

The fire service is currently investigating the cause of the fire.