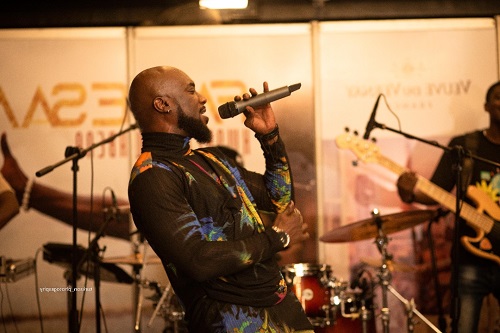 Kwabena kwabena in his element

Fa Me Saa which happens to be his 6th studio album comprises songs with each of which exhibits different side of Kwabena Kwabe­na as he tries varied rhythms and genres.

Speaking at an exclusive album listening session held on Thursday, November 3,2022 held at Level UP, Kwabena Kwabena said the period in which he composed the album was one of the most challenging times in his life, but it turned out to be an exciting moment as well.

He said, the supposed bad mo­ment turned out to be something good, adding that about 80 per cent of the songs were composed from his life experience.

Touching on one of the songs, Afraid To Lose You, he said it was borne out of self-love, adding “ he got to a point when he real­ised that you can lose yourself by loving other people.”

The ‘Aso’hitmaker said that the song was about him not losing himself.

The album released on Thurs­day November, 11,2022, is avail­able on all music digital plat­forms.