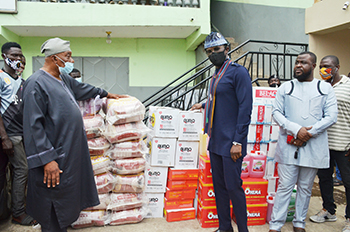 The Founder and Chief Executive Officer of the Kwarleyz Group of Companies, Nana Kwame Bediako has donated quantities of items to the National Chief Imam Sheikh Dr Osman Nuhu Sharabutu.

The item which included; bags of rice, cartons of milk, tin tomatoes, mackerel, bags of sugar, gallons of cooking oil and  liquid soap as well as boxes of bottled water.

Presenting the items, Nana Bediako said the gesture was to acknowledge the immense role the National Chief Imam was playing in the development of the nation by uniting the Muslim community and also serving as a bridge between Christians and Muslims.

He said it was important that in this time of spiritual upliftment, Muslims were supported to enable them to pray fervently for the nation.

Nana Bediako also known as Freedom Jacob Caeser said it was important that the country worked to consolidate the relationship that existed between the diverse religious sects in country.

According to him, sustaining this type of relationship would not only ensure peaceful coexistence but also serve as a foundation for national development.

“Here in Ghana you have built a culture where Christians and Muslims live together as one people. This is not only good but important for our development as a nation,” he stressed.

He said “It is important that Ghanaians celebrate their uniqueness beyond religion, colour, race or creed.

Nana Kwame Bediako said the contributions of Muslims to national development could not be overemphasised as they had kept faith with and supported every leader the nation has had in the past and now.

On his part, the National Chief Imam Sheikh Dr Osmanu Nuhu Sharabutu expressed his appreciation to Nana Bediako and pledged his support towards the Freedom Movement.

He said the items came at the right time and it would help a lot in the fast.

Sheikh Sharabutu explained that the month of Ramadan was the month that God brought in the Quran and any person who donated during that period would receive Allah’s blessings in multiple folds.

He said Allah had blessed Ghana with religious tolerance and it was important that countries around Ghana would have to emulate the example and live in peace.

Touching on the COVID-19 pandemic, he said the outbreak would come to an end and it would be a victory for the world.