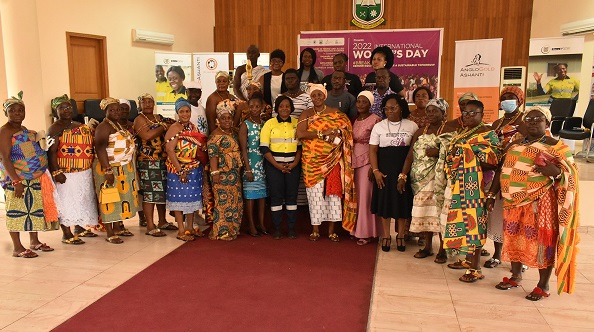 Ladies in Mining and Allied Professions in Ghana (LiMAP-Gh) in collaboration with the University of Mines and Technology (UMaT), AngloGold Ashanti (Iduapriem) Limited and Abosso Goldfields Limited at Damang has held the 3rd International Women’s Day 2022 at Tarkwa in the Western Region.

The theme for the one-day celebration was “BREAKTHEBIAS-GENDER EQUALITY TODAY FOR A SUSTAINABLE TOMORROW”.

The President of LiMAP-Gh, Prof. Grace Ofori-Sarpong said the organisation was formed to build the capacities of its members and beyond and to leave a legacy wherever it worked.

She said the international organisation was formed in 1910 but they decided to come together to form one within the Tarkwa-Nsuaem Municipality of the Western Region to break the biases by equipping themselves adequately at the workplace and transforming their generation by bringing valuable changes in society.

The Paramount Queen of Wassa Fiase Traditional Area, Nana Abena Kunadjoa 11 also said she did not want to believe that women were their own enemies because this belief would not bring any progress and promotion to the women wherever they found themselves.

She said time had come for women who were more than men to rally behind any woman who sought to stand for any public office with their money, love, energy and other resources in order to change the face of the world.

She advised those in school never to think that completing the Junior High School was the best for them to rush into marriage because statistics showed women were occupying very high positions and these came as a result of determination and hard work.

The Municipal Chief Executive of Tarkwa-Nsuaem, Mr. Benjamin Kesse said the assembly was considering giving about 70 per cent of the government appointees to women if the performance of women became very low in the next assembly elections.

He said this idea was to allow women in the assembly and communities contribute to the developmental agenda of the municipality because women were careful and very good at management.

The Community Relations Officer of Goldfields Ghana at Damang Mines, Mrs. Rahmat Yarig said those biases were being broken because many women were in the mining sector doing what was the preserve of men.

She said young women were operating dumpers, graders, caterpillars and other mining and construction machines which could not be done by women in the past.

She said notwithstanding the numerous challenges, women were up and doing and appealed to men to give them the necessary push and encouragement to go forward for the development of the family, the community and the nation at large.

The chairman of the occasion, Pro Vice Chancellor of UMaT, Prof. Anthony Simons said women were very unique and played very important role in all spheres of life.

He said right from the Old Testament to the New Testament up till date women had always been in very important positions which yielded good results.

He said the recognition of women in the various fields should be seen by their counterparts so that together they could push Ghana’s development forward.

He suggested women should be given more quota in all aspects of life adding “this job is not for women must be a thing of the past because there are many women Engineers, Miners, Pilots in all the male dominated occupations now”.

Girls from selected Senior and Basic Schools around Tarkwa and its environs attended the celebration.