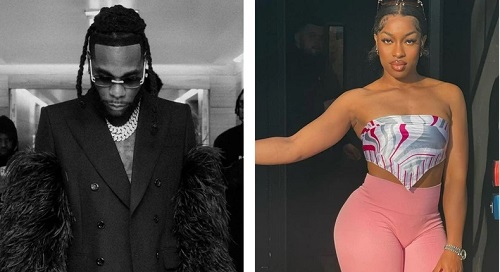 The lady who was assaulted alongside her husband and his friends by Burna Boy’s associates has finally broken her silence.

The lady simply identified as Briella Neme took to her Instagram Stories on Monday, June 20, 2022, where she gave a breakdown of what transpired at the nightclub on that fateful evening.

According to Briella, they were visiting Nigeria from the United States of America and the United Kingdom for their friend’s wedding.

They visited Cubana Nightclub to celebrate the couple in the company of about twenty friends when the ugly incident occurred.

Briella narrated how she was accosted three times by Burna Boy’s men requesting her to meet him.

“On the first attempt I told them I wasn’t interested in talking to Burna Boy and I am married to my partner. He came again the second time and was met with the same response, he came the third time and that caused a few of our friends to flare up as they asked why he kept coming to disturb me,” she recounted.

She said this led to a fight between her friends and Burna Boy’s team. However, it was briefly resolved by the security personnel at the club.

Things took a different turn when Burna Boy’s friends started a fight again and started shooting. She alleged that Burna Boy gave the green light to his security to start shooting at them in the club while he laughed about it.

Briella while recounting what happened said within a split second there was chaos in the club.

Her partner and friend were shot in the head and leg respectively.

The young lady said it took the owner of the nightclub, Obi Cubana four days to reach out to them after the shooting.

Breilla said she has been traumatised since the ugly incident.

The news of Burna Boy and his associates almost killing fun-seekers at the club broke some weeks ago.

Several eyewitnesses gave accounts of how the singer and his crew acted in an uncivilised manner causing harm to both people and properties at the club.