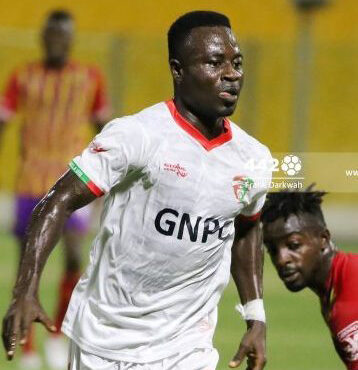 It might be dawning on Karela United that they can only carve out a piece of history in Ghana football by giving their all in battles ahead of them.
So far, they have been tremendously consistent even though they had fallen a few times in the fierce campaign.
The good thing for the westerners is that they had remained impregnably solid at home until that pride was crushed by Asante Kotoko a couple of weeks ago and as they plunge into battle tomorrow against Aduana Stars, they would be bitterly reminded of that home pain.
For the visitors, they would have to work on their away record, having only notched one in their game against Kotoko on match day 10. Sitting seventh on the league log with four points behind leaders Karela, the Dormaa-based side could count on the experience of their lads such as Yahaya Mohammed, Emmanuel Akuoku, Samuel Bio and a few others, to deliver the goods.
But after going blank in his last two games, Karela’s Diawusie Taylor – who tops the goal chart with 10 goals, could use this test to rediscover his scoring form. The likes of Richard Berko, Umar Bashir and Sadiq Alhassan are all players who can pull the strings for the leaders.
Elsewhere in Techiman, it would be a battle of survival for King Faisal who welcome struggling Liberty Professionals to the Nana Ameyaw Park today.
Both sides have been poor in the campaign with three wins from each side and a point difference between 16th-placed Liberty and 17th-positioned King Faisal.
Faisal still stands a chance of avoiding relegation should they snatch a win against Kotoko in their outstanding game. The count on talisman Kwame Peprah, who hold eight goals for his side, will be huge for the ‘Insha Allahu’ boys. Liberty, on the other hand, will eagerly see the return of Brite Andoh.
At the Golden City Park in Berekum tomorrow, Berekum Chelsea will welcome in-form Medeama in a mouth-watering clash. After a poor start, the Tarkwa-based side has now gone unbeaten in their last meetings as they sit fourth with four points behind Karela. Chelsea on the other hand, have picked up one defeat in their last five games and could be aiming to end the fine form of the visitors.
The return of Ahmed Toure for the Mauve and Yellow lads could be deadly for the hosts as the Ivorian import has scored three goals in his first two games for the side.
Their last trip to Accra resulted in a slim 1-0 defeat to Inter Allies, but poor away travelers WAFA SC, will be eager to make amends against Hearts of Oak tomorrow. The Phobians have gradually found the missing link after the departure of Kosta Papic with two wins and a draw in their last games.
With the announcement of Samuel Boadu as new Hearts gaffer, the former Medeama trainer will take charge of his first game and would hope to start on a good note to seal all three points.
Ebusua Dwarfs will travel to face Bechem United on Sunday afternoon at the Bechem Park in a tight contest. With just a point separating eighth-placed Bechem and 10th-placed Dwarfs, the hosts will hope to keep their fine home form against Dwarfs who also have a good away record with wins against Legon Cities, Liberty Professionals and Inter Allies. A tough game it could turn out to be.
At the Nana Ameyaw Park in Techiman, Eleven Wonders are tipped to see off an improved Legon Cities who have gone five games unbeaten. Nevertheless, Bashir Hayford can make it his second away win of the season and could count on new boy Hans Kwofie, who has found the back of the net three times in two games for the Royals.
High-flying Dreams will lock horns with Great Olympics tomorrow at the Theatre of Dreams in Dawu. Both sides are enjoying a good run in the league and would be aiming to keep their consistency. A ferocious game is guaranteed.