‘Leave your comfort zones to serve others’ 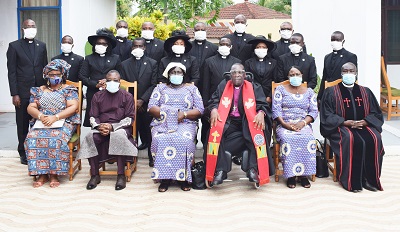 The Moderator of the General Assembly of the Evangelical Presbyterian Church, Ghana (EPCG), Rt Rev. Dr Seth Senyo Agidi, has appealed to politicians and pastors of some latter day churches to leave their ‘comfort zones’ for a while and attend to the needs of the underprivileged.

He insisted that the call to politics and priesthood demanded nothing “but sacrifice and service to humanity, without amassing wealth at the expense of the less privileged in society.

Rev. Dr Agidi was preaching the sermon at the inauguration of 14 ministerial candidates of the church at the Dela Cathedral at Ho, the Volta Regional Capital.

The Moderator likened the duties of the politician and priest to that of the frontline health workers who put their lives on the line for others to live as they battle COVID-19 in the contemporary Ghanaian and global societies.

“Politics is also actually a very noble field but the mindset of those playing it is what is destroying our society,” Rev. Dr Agidi observed, and then cited the good example of the late Nelson Mandela who spent 27 years of his life in jail to bring relief and justice to others; and also Martin Luther King Jnr who sacrificed his life crusading for social justice in society.

Still on sacrifice, Rev. Dr Agidi mentioned the late Mother Theresa who spent her entire life caring for others without making any profit from her charity.

He said it was, indeed, sad to realise that some politicians and pastors used their positions as means to loot and acquire wealth while the people they claimed to be serving rather wallowed in abject poverty with no hope in sight.

He sought to know why a priest would advertise his portrait on huge billboards at vantage points in cities with the aim of raking in money, instead of spreading the word of God to bring comfort to others.

He stated that the unhealthy competition for ‘filthy’ money in Christendom was posing a very bleak and dangerous future for the nation.

“And politics has foremost become an avenue for a well-paid job with cars and big houses, without placing the needs of the people first,” Rev. Dr Agidi added.

The man of God entreated the ministerial candidates to serve their congregations with love, humility, obedience, be prayerful, “and serve God and others before yourself.”