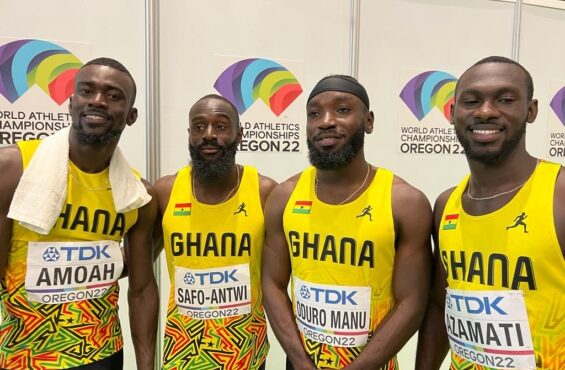 It is not all-too surprising, though; because we have not invested enough to expect a medal from such high-profile championship.

We can only harvest from where we have sown.

Ghana competed in five different events – including men 4×100m, long jump, 100m, 200m and 800m – and per some of the times returned in the season, some Ghanaians were expectant of a medal or two. Fair enough.

The first day saw Ghana’s 100m record holder Benjamin Azamati and Joseph Paul Amoah failing to progress in the heats after finishing in fourth and sixth positions with times of 10.18s and  10.22s respectively.

Amoah again slumped in sixth spot when he took another turn for the 200m.

Up came Alex Amankwah, another hopeful. But after staging a fantastic run in the 800m heats and finishing in fourth place with a time of 1:45.92, something bad happened. Sadly, for the 30-year-old athlete, he was disqualified for lane violation, moments after the race. He burst into tears in pain and disbelief.

But some little joy was to come when the quartet of Sean Safo-Antwi, Benjamin Azamati, Joseph Manu, and Joseph Amoah ran a blistering time of 38.58s – a season’s best, to finish third behind the USA and Great Britain – taking them to the final.

But wait a minute. The final was a beauty to behold as the smashing Azamati ‘jetted off’ the quartet to finish fifth – but what initially looked like third place – with an imposing time of 38.07s.

They could still have done better though, but that creditable performance should be a gigantic motivator ahead of the Commonwealth Games.

Sadly, the nation’s in-form long jumper Deborah Acquah also failed to glitter as she only managed a distance of 6.46m, critically below the 6.75m automatic qualifying mark. Indeed, she had rolled off with two faulty jumps before finally making a first-rate jump but that was not enough to get her through to the finals. Come to think of it, Deborah is the nation’s national record holder in the women’s long jump with a leap of 6.89m.

But just like her colleagues, she has promised to make amends in the Commonwealth Games that roared off Thursday.

Though disappointing, Ghana’s run at the world championships is not a hopeless story, at all. Yet, it teaches grave lessons; to take some fine look at disciplines that can haul home medals and put Ghana on the world map.

We pride ourselves as a sports nation yet are so deeply engrossed in virtually one discipline – football, to the detriment of the rest.

Yes, we know the passion of the nation is sports; but if other disciplines that we have comparative advantage like athletics, boxing, weightlifting, to mention but a few, are accorded some measurable amperage of support financially, Ghana would be the cynosure of all eyes during games.

On this note, we can only wish our athletes the very best of luck as they dash for yet another adventure to carve a niche for themselves in Birmingham and also bring glory to the country.

Having said that, it would not be out of place to gild the lily of Isaac ‘Royal Storm’ Dogboe for outpointing his American counterpart – Joez Gonzalez in their world title eliminator in the USA, last weekend.

The Royal Storm’s resurgence is so admirable and could easily serve as reference point for many boxers.

Having fatally lost twice to Mexico’s Emmanuel Navarrete, and losing his WBO super bantamweight title in the process, many wondered whether he could navigate his path back into the pugilistic sport.

But he did. His doughty character, self-belief, strong-will and supreme determination, were deeply embedded in his rock-solid frame.

Truth, however, is that Dogboe would have to improve tremendously as he seeks for a second world coronet against – possibly USA’s Ray Vargas. He is another demon in the ring.

That fight should be a monolithic undertaking and it would demand something more unique from the Royal Storm to scale.