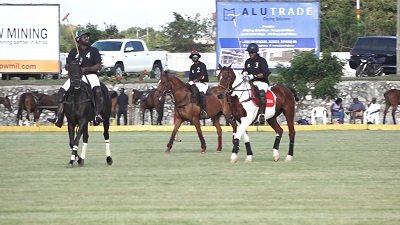 Limitless Foundation, a non-profit organisation has organised the maiden edition of the Foundation’s Charity Polo Tournament in Accra.

The event, which was held at the Accra Polo Club last Saturday, was to raise funds to support Persons with Disabilities (PWDs) in the country.

The tournament, which was between esteemed members of the Accra Polo Club was in two sessions; for juniors and seniors of the club, ie, Limitless Black team and limitless black team.

The winners were awarded with plaques and souvenirs for their performance while individual players were also given prizes for their outstanding performances.

Speaking at the event, the Gender Minister, Mrs Cynthia Mamle Morrison commended 17-year-old Arnav Nambiar for always supporting PWDs and also organising the tournament, adding that such events allow PWDs to feel part of the society.

She encouraged PWDs not to feel ashamed of their situation but get themselves involved with such activities anytime they have the opportunity partake in it.

Mrs Morrison pledged the government’s continuous support to PWDs in the country, stating it will continue to provide job opportunities for them, as well as support organisations like Limitless that aims at assisting PWDs in the society.

The Founder of Limitless, Arnav Nambiar expressed excitement over the event, stating that the amount raised was good enough and therefore would go a long way to support the needs of the PWDs.

Being a victim of road accident in 2018, he explained his experience motivated him to support PWDs, therefore organising the friendly tournament to support their needs.

“That incident urged me to do something to support people who are living with physical challenges. I initiated this foundation and called it Limitless Ghana. The main objective of my foundation is to raise awareness and extend support to facilitate the lives of persons living with disabilities in Ghana,” he said.

He was of the view that sports is an excellent platform to inspire people, adding that the Para-athletes who represent the country in various international events are national treasures and therefore need to be supported by individuals, organisations, government and the country as a whole.

“Our Para-athlete superstars need support in the following areas of preparation, camping, kitting, competition apparel, transport, food and nutrition. Most of all they need professional help to develop their skills and empower themselves to shine in an international arena. They are heroes, ordinary individuals who find the strength to persevere and endure in spite of overwhelming obstacles,” he said.

Arnav Nambiar added that, “They serve as an inspiration to what can be achieved by all others in similar situations. Every human being matters, everyone has potential. Total inclusion for a dignified, productive life, to be an integral part of the society is the aim.”

For his part, the Japanese Ambassador to Ghana, Mr Himeno Tsutomu made it known that Japan had put in place measures and are ready to host Ghana in the upcoming ‘World Para Power Lifting Invitational Competition’ in February 2021.

He also expressed excitement over the Limitless first charity polo tournament, stating that the Japanese government will continue to support PWDs in that regard.

The Colombian Ambassador to Ghana, Ms Claudia Turbay Quintero, also commended Limitless Foundation for organising the tournament and also pledged her support to the Foundation.

The main objective of Limitless Ghana is to create awareness about persons living with disabilities in Ghana and raise funds to support their needs.

Limitless Foundation partners with the National Paralympic Committee (NPC) and stands to engage with all disability based organisations.