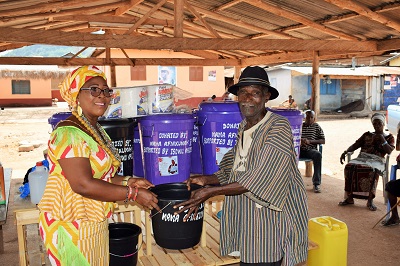 Mama Afiakumah II, Queen of the Tsowu-Afede Clan of Ve-Deme in the Afadzato South District of the Volta Region, has said that the social distancing protocol in the wake of efforts to contain the spread of COVID-19, is no justification to leave the surroundings dirty.

She insisted that communities must still be kept clean while observing the social distancing.

Mama Afiakumah described as highly unpatriotic the lazy attitude of some young people who hid under the social distancing protocol and refused to tidy up their communities in recent times.

She made the remarks while presenting 10 Veronica buckets, 10 buckets, consignments of liquid soap, hand sanitisers, paper towels and masks among other items, worth about GH₵4,000 to the Ve-Deme community to support the hand washing culture in the area.

Mama Afiakumah said that the pandemic should rather prompt the citizenry to renew their patriotic spirit and team up to fight the virus with great zeal and enthusiasm for life to return to normal in the country as soon as possible.

The queen also entreated parents to monitor their children around the clock while schools were shut, to ensure that they did not drift “off course in these trying times”.

She explained that, leaving children to be on their own all the time may cause them to indulge in vices inimical to their future.

“Our children can continue to learn even outside the classroom until the schools re-open,” Mama Afiakumah added.

She pointed out that the crusade against COVID-19 required all hands on deck, for which she called on all and sundry to support the government’s efforts to contain the spread of the virus.

The queen highlighted the need to maintain high standards of hygiene at all times, saying cleanliness was next to godliness.

She commended the Tsowu-Afede Clan for their strong communal spirit and unity, and urged them to maintain and utilise it to support the community’s set of development objectives.

She announced plans to grow trees along the one-kilometre road between the Ve-Deme junction and the community, with support from the Forestry Commission, saying that the project could be carried out vigorously by the youth in strict adherence to the social distancing protocol.

“There is a lot we can do for ourselves before looking up to the government for support for other projects,” Mama Afiakumah pointed out.

Receiving the items, Togbe Sodzi VI thanked Mama Afiakumah for the unfading concern for the welfare of Ve-Deme and described her as a jewel of the soil.

He gave the assurance that the Ve-Deme community would remain united and focused in its unflinching resolve to support the fight against COVID-19.