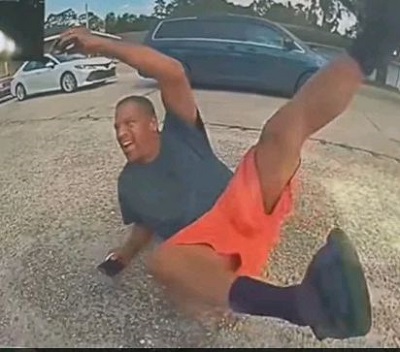 Police arrested a man in the southeastern US state of Louisiana after he falsified a police report that a Tesla car hit him in a parking lot.

Without knowing that all Tesla vehicles record their camera footage, the man said a Tesla “backed into him”, causing him to fall on the pavement.

The 47-year-old man, identified by the local police as Arthur Bates Jr,claimed that the vehicle driver fled the scene after the incident. A video shared by the police department showed how the man staged the whole episode on September 3.

The clip has no sound. It showed Mr Bates suddenly falling behind the vehicle and dramatising the “accident”. He tried to seek the attention of passersby and remained on the pavement for some time, then turning to his side and dialling his mobile phone, possibly informing the authorities.

Mr Bates had complained of back, leg and neck injuries, following which an ambulance and fire truck had to be dispatched to the location.

When police officers found the Tesla, the driver told them Mr Bates intentionally jumped behind his vehicle and staged the accident.

“When Police officers reviewed the Tesla’s video footage, it became apparent that Bates was lying and staged the entire event,” the police said in the post.