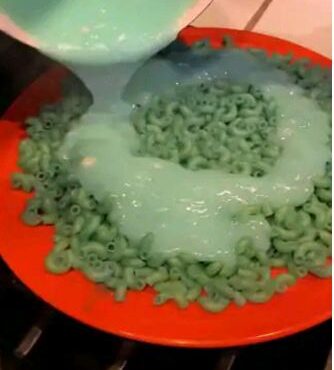 In a video that can only be described as bizarre, a man was filmed preparing pasta with an energy drink.

The universal popularity of pasta has often times been attributed to its ease of preparation and the myriad ways in which the Italian staple can be cooked.

While red and white sauce pasta dishes are fairly common, several countries across the world have their own recipes for preparing pasta – but this is perhaps the first time that pasta had been cooked with energy drink.

American magician, Justin Flom, shared a video of his friend cooking the pasta with a blue-coloured energy drink.

Not satisfied with simply cooking the pasta in the energy drink, he went on to prepare a ‘pasta sauce’ that incorporates flour with the same energy drink.

The video had been viewed 5.6 million times on Facebook. In the comments section, many called the dish “disgusting” and “horrendous”.  – ndtv.com

CCTV footage that has gone viral online captured a leopard walking the corridors of a medical college in Karnataka, India.

The footage which showed the leopard running into the hostel building was shared on Twitter by a Forest Service officer.

It showed the leopard running the length of the corridor and inspecting a door before going out the same way it had come in.

“Bagheera has come for admission,” quipped one person in the comments section.

Dr Sanjeev, Dean of the Medical College said as the college was attached to a tiger reserve, leopards were often spotted on campus. – ndtv.com