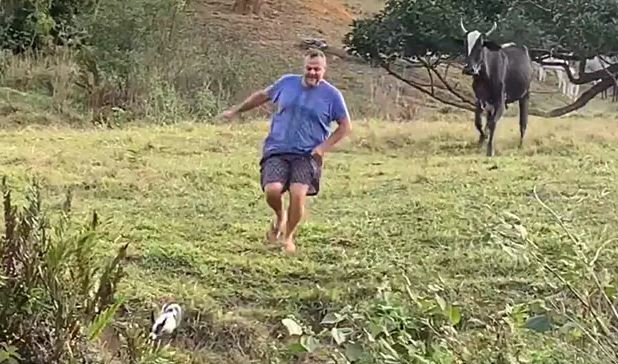 The animals chased the man as he ran from the spot

The internet is filled with hilarious videos and now one such clip showing a man having a great fall after being chased by cattle is doing rounds online.

The video which has accumulated around 40,000 views so far captured a man, dressed in a t-shirt and shorts, taking a stroll around a meadow while cattle were grazing in the field. Moments later, the animals were seen chasing the man as he ran from the spot in an attempt to escape.

The man tumbled in the field quite a few times before he hilariously slipped and fell into a pond. In between all of this, a little dog was also seen running along with the person.

At the end of the clip, the man stepped out of the pond and did not seem injured. Rather, he was seen hilariously laughing and looking for his slippers in the water. The video was shot in Brazil.

One internet user jokingly wrote: “Don’t play with the cows.” Another said, “You play stupid games and you win stupid prizes. Cows kill more people every year than you would even think!”  — ndtv.com