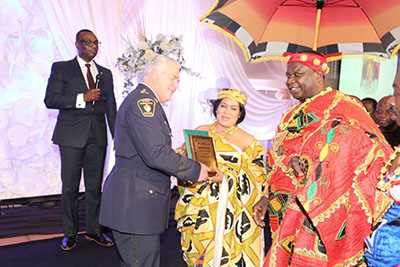 When he stepped on Canadian soils as far back as February 1987, it never crossed his mind that few years later, he was going to lead Ghanaians in that beautiful country – situated at the northern part of North America.
Indeed, for Nana Kwateng Amanin, he had traveled to Canada because of what he described as “its diversity and openness to blacks” – having watched the Summer Olympics staged in Montreal.
“I had watched the Olympic Games and seen that there were many blacks in the team, which made me understand that there were opportunities there. And, when I came, I was gladly surprised because my assumptions were confirmed,” he recalled with nostalgia.
Imbued with a rare sense of discipline, dedication to work and readiness to assist people in need, Ghanaians living in Montreal decided to dash for him to be their chief and leader.
As fate may have it, he was unanimously acclaimed by friends and citizens of Montreal as their chief with the chieftaincy title “Montrealhene.”
“He is one of a kind. He endeared himself to us with his sterling leadership qualities and ever-ready service to the people and so we virtually badgered him into leading us,” Kwame Boateng, who has been living in Canada for the past 17 years, confirmed in an interview with The Spectator.
Montreal is the most populous city in the Canadian province of Quebec and the second-most populous city in Canada.
Service
According to the Montrealhene, serving mankind has always come easy “because that is what I love doing best and it gives me a deep inner sense of satisfaction.”
“Let me say that service to man is service to the Lord Almighty. I have volunteered my time since I was young,” Nana Amanin, who doubles as the Abusuapanyin of Sunyani Krontire Abusua, back in Ghana, said.
Oath
On September 7, 2019, Osadeoyo Kwateng Amanin swore the oath of allegiance in public to the Ghanaian Community in Montreal, Quebec, with representatives from the Prime Minister of Canada’s Office in full attendance and other dignitaries from the Kanawake First Nations and City Councillors in Montreal.
It was a grand, scintillating ceremony. And, Nana Amanin was thrilled!
“I thank the Ghanaian community, the Canadian Prime Minister, Justin Trudeau, the city councillors, and specifically Mary Deros, the entire Ghanaian community, the Montreal Traditional Council, the pastors in our community, my family, especially my wife and my two sons. I would not be where I am if it wasn’t for them. God bless Ghana and God bless Canada,” he asserted.
Nana Kwateng Amanin was born at Sunyani in the Bono State to Opanin Kofi Nsowaah, a successful farmer at Sunyani. His mother, Madam Adwoa Serwaah, was also from the same town.
Background
He started his primary school education at High Street Primary, Sunyani, and continued to Twene Amanfo Secondary School at the Sunyani Bono State before moving to Canada to study at the Algonquin College in Ottawa, Ontario.
Though a chief, Nana Amanin is a respected businessman in Montreal who specialises in retail of beauty products supply and services.
The Montrealhene has been trying hard to promote Ghana to the Canadian society, but the task appears to be a Himalayan undertaking because of the diversity of culture of his people.
“In Ghana, we have many cultures and traditions, which make it quite challenging to unify all the Ghanaians here and make them have a single voice,” he said, but was quick to add that “God is always on my side and so I know I will succeed.”
Oseadeyo Amanin has a lovely wife – Madam Mercy Ama Konadu and blessed with two sons. The first – Kevin Kwateng, is an engineer and the second – Edwin Kwateng, a businessman.
The Montrealhene says he has no regrets in life “because God has blessed me with a beautiful wife, two lovely sons and hundreds of loyal friends including Prime Minister Trudeau.”
Nana Amanin has some immense love for soccer and ice hockey which he describes as “phenomenal.”
A liberal disciplinarian, he has advised the youth to be obedient, law abiding and pay heed to their parents.
“It is always important for the youth to show respect to their parents because they (parents) want their children to become big and assume a bear-sized part of society. I again advise them to listen to their elders because it takes the whole village to raise a child.
“Last but not least, our children and youth should focus on education, education and education. That’s the all-important key to their future.”
Appeal
The Sunyani Krontire Abusua Panin has appealed to the youth to vote peacefully during the forthcoming December 7 general elections, urging them not to allow themselves to be used by people who only seek their selfish interests.
“Every vote counts, so it’s good for the youth to vote. However, they should be careful not to be used for any political violence during the December 7 elections. Ghana is a very peaceful country and we ought to protect its sanctity and integrity.”
In 2014, the Montrealhene with the support and encouragement from the late Nana Anane Peprah and some active members in the Ghanaian Community in Montreal, formed the Traditional Council of Montreal, operating in the province of Quebec.
However, the idea of unifying the Ghanaian Community on chieftaincy, cultural and traditional practices, dates back to 1987 when the Omanhene Osadeoyo Kwateng Amanin set foot in Montreal, Quebec.
The Traditional Council of Montreal, among its mission, is to promote and practise Ghanaian culture and values in Canada and the diaspora, maintain and keep the Ghanaian heritage and also have a sense of belonging as a community of African descent.