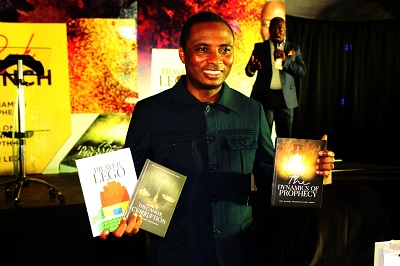 The books are titled: “Prayer Lego”, “Quotes on Canker of Corruption” and “Dynamics of Prophecy.”

They are the first inspirational books written by Rev Abbey with focus on the need to pray to the kingdom or the right prayer for results, how to identify the real prophet and hear the voice of God through prophesies as well as how to avoid the ‘ancient destroyer’ called corruption.

Launching the books, Prophet Prince Manasseh Atsu, Founder and General Overseer of Watered Gardens Church, urged men of God to appreciate Christian literature and the role it could play in their development relative to the wonders of God.

He advised the entire Christendom, and for that matter the youth, to learn to study the Bible and listen to the voice of God before they acted.

“Let us train ourselves to acquire knowledge through the studying of the Bible and reading of other Christian literature to discover and understand our God-given talents to enable us act properly,” he said.

Prophet Atsu said that there were a lot of abilities and talents deposited in man, but they “are unable to discover what they have due to lack of knowledge and understanding.”

He said that it was only God who could understand the problems of this life if only man would learn His ways and turn to Him, adding that “Life is not as we see it, but as Christians there is more to it than the physical world.”

Prophet Atsu Manasseh, therefore, recommended the books for the churches, especially the youth, to enable them live lives worthy of emulation to the glory of God.

The books are to inspire people, especially the youth who are in despair, to have faith in their Creator, recognise Him as their source of life and get back to Him to live excellent lives.

Mr Michael Karikari Yeboah, a lawyer, who reviewed the book on corruption, said it addressed the old-aged canker in a very revealing way.

He said the book, which contained seven chapters, 61 pages and 85 quotations with 5,331 words, was not only simple to read but also a great piece of work by the author, who was himself a “Wordsmith.”

Lawyer Yeboah, who dwelt much on chapters four and five, said the author likened corruption to a weapon that had the potential to destroy or bring significant harm or damage to numerous people, generations and human-made structures which was the first-ever weapon manufactured by Satan.

He said the book stressed that often politicians and leaders in general were accused of corruption, whilst the citizenry also forgot the pivotal role they played in the ‘corruption trade’ as far as the chain of corruption was concerned.

“I find this book to be very easy to read and can attest to the industry and scholarly research that has gone into it before it was published. This book is a masterful work of ‘wordsmith’ – fluent and prolific writer and a must read book,” he concluded.

Reviewing the book on the Dynamics of Prophecy, Professor Charles Owiredu, President of Yeshua Institute of Technology also said it talked about who a real prophet was and called on all to be careful of the current prophetic wave in the country.

He said the book talked also about how to test or question the prophecy of a man of God and appealed to his colleague pastors to “humble themselves for the church members to question what they say to enable them grow to the standard of God.”

He said it was only God who could not be questioned, and advised Christians to take their Christianity very seriously by studying to know what God had said about them, else they would always fall victim to unscrupulous men of God.

“Any prophet whose word fails to come to pass does not come from God, because any word declaration from God has the dynamic and the creative power to unlock things to the benefit of mankind,” he said.

On the “Prayer Lego”, Dr Spencer Duncan, President of Leaders Digest, said the author used the Lord’s Prayer as Kingdom Pattern to get to the Father with each chapter assigned.

He said the writer broke the Lord’s Prayer into pieces and underscored that prayer had levels controlled by the gift of God’s grace for meaningful and maximum prayer impact.

He said Jesus Christ’s statement to the disciples that, “If you pray, say” meant Lego in Greek and until the one praying verbalised it, it would not be effective.

Quoting from the book, he said: “Jesus Christ ‘legolised’ prayers for effectiveness and efficiency.”

“The key word Lego carries an autogenic conditioning to learning to visualise, verbalise and emotionalise your prayer to God,” he quoted.

He said he had read many books on prayer but the Prayer Lego was different and recommended that all Christians should have a copy for the generation to come.

The Chairman of the occasion, Madam Patricia Obo-Nai, CEO of Vodafone Ghana, said the books were written for the Christian youth of Ghana because they talked about what God could do in the life of anyone who turned to Him.

In his submission, Rev Abbey advised the people to do whatever they could do well but should never allow disappointment to consume them.

He said he feared writing but took inspiration from the word of God and encouragement from friends and mustered the courage to bring out such wonderful books.