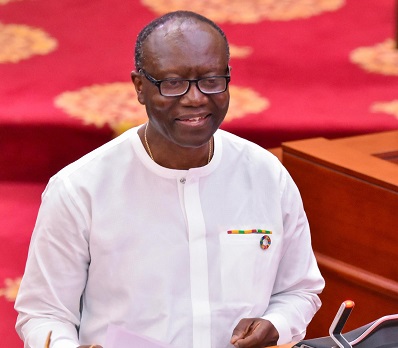 “ I am here today, respectfully, Mr Speaker, not to ask for more money, not to ask for more taxes, but simply, to update you on the performance of the economy for the first half-year of 2021 and our plans for the unexpired term of the year, consistent with section 28 of the Public Financial Management  Act.

“Mr Speaker, this Mid-Year Fiscal Policy Review that I am presenting does not come with a supplementary budget, and our revised fiscal framework for 2021 is kept within the fiscal target of 9.5 per cent of Gross Domestic Product (GDP). We are staying within the 2021 Appropriation,” these were the words of the Finance Minister, Ken Ofori-Atta, when he presented the 2021 Mid-Year Budget Review to Parliament on July 29, 2021.

The review is in line with the section 28 of the Public Financial Management Act, 2016 (Act 921), which enjoins the Finance Minister to do so.

Over the years, it has been giving an overview of the general health of the country’s economy for the first half of the year, focusing on the government’s revenue in relation to its expenditure, which often outstrips  revenue for which  more revenue is requested for the government machinery to run.

Therefore, it was a novelty that in the case of this year, the Finance Minister boldly said he needed no extra money.

In a country where revenue generation is largely dependent on grants, tax revenue and concessional loans from development partners, it is not surprising expenditure would always outweigh revenue.

As usual, the country’s tax revenue is largely generated from some formal workers whose income tax is deducted at source and some formally- registered businesses.

Over the years, revenue generation from the informal sector has been low due to the inability of the Ghana Revenue Authority to identify and locate such business operators for tax purposes.

With the low tax collection rate, coupled with increasing expenditure, the government had no other option but to borrow to meet its revenue needs.

In this case, Finance Ministers often use the Mid-Year budget to request for additional resources to be able to finance the budget.

For example, in last year’s Mid-Year, because of the inability of government to meet its half-year revenue needs, Mr Ofori-Atta had to request Parliament for additional funds to finance the budget.

On July 23, 2020, Mr Ofori-Atta presented what he called “an Extraordinary Mid-Year Fiscal Policy Review of the 2020 Budget Statement and Economic Policy”, and secured more funds to provide an immediate and appropriate response to the severe health and economic impact of the COVID-19 pandemic.

Delivering the Mid-Year Fiscal Policy Review of the Budget Statement and Economic Policy of the Government of Ghana for the 2021 Financial Year to Parliament on July 29, 2021, Mr Ofori-Atta, among others, provided the revenue performance of the country for the first half of the year.

“With our digitalisation initiatives, we are building a robust framework to expand Domestic Revenue Mobilisation to focus on compliance and enforcement. To this end, we have established the Revenue Assurance and Compliance Enforcement (RACE). The remit of RACE is to identify and eliminate revenue leakages while reinforcing the culture of compliance nationwide,” the Finance Minister said.

One major challenge threatening the development and security of the economy is unemployment.

In describing the dire situation of the growing unemployment among the youth,   Mr Ofori-Atta said “interaction with the youth across the country showed how enormous the problem is, which requires swift action to address.”

The Finance Minister said the government was concerned about the unemployment problem and would work assiduously to address it, telling  Parliament that, “Mr Speaker, we will confront the unemployment situation aggressively.”

To this end, Mr Ofori-Atta announced that the government had developed a three-year strategy to create job opportunities for one million Ghanaian youth, saying,  “There are currently about five ongoing programmes, including YouBanC product.”

He took the opportunity of the review to outline initiatives the government had embarked upon to build back the economy from the ravages of the corona virus pandemic and spur the growth of the private sector.

They include the audacious GH¢100 billion Ghana COVID-19 Alleviation and Revitalisation of Enterprises Support (Ghana CARES) “Obaatan Pa” Programme and the establishment of the Development Bank Ghana.

“I am also happy to report that under the Ghana CARES programme, we have made considerable progress towards our pledge to create a well-lubricated financial ecosystem to support the private sector in revitalising and transforming the economy. In doing this, we are paying special attention to anchor wealth-building for our youth,” the Minister said.

Concerning the Development Bank Ghana (DBG), Mr Ofori-Atta said it was expected to be set up in the third quarter of this year to help address critical financial constraints faced by businesses.

“DBG will mobilise funds from both the domestic and international markets to support the private sector to invest in a medium- to long-term basis. DBG will thus unlock long-term financing for actors in the manufacturing, agriculture, agro-processing, mortgage, and housing sub-sectors to propel economic growth, create jobs and improve domestic revenue mobilisation,” the Finance Minister said.

Ordinarily, the implementation of the aforementioned programmes should have occasioned his request for more money, but he did not.

Indeed, the expectation of many Ghanaians was that the Minister would ask Parliament for more money in view of the numerous interventions being pursued by the government for the country’s economic growth recovery from the effects of the coronavirus pandemic.

Commenting on the issue, Prof Peter Quartey, Head of Economic Division of Statistical, Social and Economic Research, University of Ghana, said it was not strange that the Finance Minister did not ask for more money to spend.

“Based on prevailing economic conditions, the government can ask for more money to spend or stay put,” he said.

But the Minority Leader in Parliament, Mr. Haruna Iddrisu, said the Minister could not make any financial demand “because the government has no option”.

He said since President Nana Addo Dankwa Akufo-Addo could not put in place the full complement of his government such that there were no Ministers and Chief Executive Officers,  there was no way the government could ask for more money.

Whatever the case is, the Akufo-Addo-led government has introduced a novel act that must not be analysed on the surface, but deep enough for us to see if that can guide prudent spending to enhance national development.